The gourmet market is expected to open when The Signature opens its 508 residential units and nine levels of underground parking in 2018. It is currently under construction at Reston Parkway, Freedom Drive and New Dominion Parkway, on the site of the former surface lot. 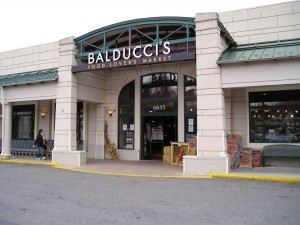 “We are thrilled about joining the Reston community and look forward to bringing our exemplary food selections and impeccable service to new area customers,” John Coleman, a Balducci’s spokesperson, said in a release.

The Reston site will be the eighth full-service store for Balducci’s, with locations operating in New York, Connecticut, Maryland and Virginia, the company said.

Balducci’s formerly had a store down the street at The Spectrum, where PetSmart is currently located. The location, formerly a Sutton Place Gourmet, opened in 1996 and closed in 2005. The Balducci’s CEO at the time called it an “underperformer.”

But with hundreds of new apartment and condo units built or planned in the Town Center area, the 2018 timing — and population density — may be better for a new store.

Boston Properties Vice President of Development Rich Ellis said the market will be a “tremendous amenity” for the area.

“Balducci’s is a best in class gourmet market that will serve as a tremendous amenity not only for residents of The Signature, but for the Reston community as a whole,” he said. “Our team is very excited to be partnering with Balducci’s on this exciting new destination.”

Balducci’s will have gourmet groceries, as well as a large prepared food and retail wine selection.