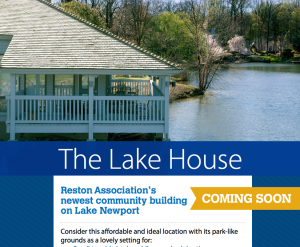 This is a commentary from Reston resident Terry Maynard. It does not represent the opinion of Reston Now.

As RestonNow readers know by now, RA has at least a $451,000 budget shortfall in its operating income and capital investment for renovations of the Tetra property to bring it up to County code and other standards that make it usable for its intended purposes.

If I am reading the Board of Directors and Fiscal Committee agenda packages for this week correctly, the so-called Lake House Working Group is asking for an additional $428,000 for renovation of the property in addition to the $259,000 —  increasing the projected renovation costs by 165 percent — apparently budgeted for Tetra property renovations this year although it is unclear that the previous sum was ever approved by the Board of Directors. (See the “Lake House” presentation to be given to the Board in the agenda packet, p. 11.)

That’s a total of $687,000 in renovations to be put into a building that, at a $2.65 million purchase price, was already a $1.5 million above fair market value. So if the supplementary capital budget is approved, through this year RA will have spent $3.35 million for a building worth about one-third of that. And that will probably not be the end of what of the investment needed to make the Tetra property usable.

At the risk of overusing a catchphrase, this is Tetragate with all that suffix implies. Everything about the Tetra purchase effort is wrong — and some of it possibly illegal — from the initial RA proposal to purchase the Tetra property through this week’s request for nearly another half-million dollars just to fix what’s wrong at Tetra.

The Tetra Referendum Information Guide (the voter’s guide) forecast that total “capital improvements” needed for the property would be the $259,000 to be spent this year. According to the guide, RA based that forecast cost figure simple-mindedly on an $80 per square foot cost (3,125 SF) plus $9,000 for work on the grounds. It is left unsaid why RA thought $80/SF would be enough to fix the Tetra fiasco.

No doubt one of the reasons RA thought the forecast that $80/SF would be sufficient is that RA implicitly assumed it would receive the building in good condition, yet in a RestonNow op-ed at the time of the referendum, I noted the poor condition of the building. In fact, RA told the appraisers to assume “deferred maintenance has been corrected.” By whom, the tooth fairy? This is the fantasy world RA and the Board of Directors was selling Restonians a year ago.

Instead, now the residents of Reston find themselves likely tagged with up to a $700,000 bill to bring the building up to standards and re-design its interior for RA needs. That’s a cost of more than $220 per square foot — a nearly three-fold increase in the now-estimated cost of renovating this growing money pit. It is also a cost of more than $30 per RA household this year.

How is RA going to hide that renovation cost and say the Tetra project did not affect RA assessment fees next year? What programs, staff, etc., will have to be cut to pay the Tetra bill? Already RestonNow reports early season swimming pool hours are being reduced. What’s next?

Aside from the fact that the $428,000 request for added funds is for the capital fund for Tetra renovations, not the operating fund where Tetra’s revenues would have been recorded, RA’s mismanagement of the lease arrangement with Tetra was absolutely spectacular on so many levels.

Moreover, even if Tetra had remained another full year, the funding deficit now would still be some $300,000–more than double the total forecast (and possibly budgeted) costs of all required Tetra renovations.

Moreover, Fulkerson tries to save the Tetra effort and herself by saying “she scaled them (the renovation costs) down in an effort to save money,” according to the RestonNow article. Wow, she scaled them down from $1  million dollars to a mere $687,000 when RA and the Board told the community that the total cost would be $259,000.

Instead of a four-fold budget overrun, we are now looking at less than a three-fold overrun. That’s chutzpah; it is not responsible budget management. I doubt her household runs the same way, but now she, RA, and the Board are spending other people’s money — so who cares?

And the Tetra operating budget/outlook for 2016 is all over the place. Here is what I can find on operating revenues and expenses leading to net operating income/loss for the Tetra property in 2016:

From all indications, RA and the Board of Directors are playing a three-card monte con game with Restonians assessment fees, shifting revenues and costs to whatever category best fits their argument at the moment. In fact, I challenge RA to explain fully all the above budget/plan operating income inconsistencies in a manner reasonably consistent with generally accepted accounting practices (and there are others but this op-ed is already too long).

The entire Tetra project smacks of misfeasance if not malfeasance and, in my opinion, those responsible should be held accountable and measures taken to prevent further financial abuses. But none of that can occur unless and until the RA Board of Directors takes the time to examine thoroughly what has happened and, in particular, does not sweep the matter under the rug again by rushing immediately to approve the $428,000 budget supplemental that is being put before it for the first time this Thursday.

In this regard, I strongly support the recommendations laid out in a Reston 20/20 blog post published on Monday. To summarize, it states:

Corporations worth hundreds of billions of dollars with billions in assets all over the world and hundreds of thousands of employees can produce an annual financial report in less than three months, not the six months RA is taking for what should be a routine annual task. The greater the delay, the greater the belief that something is seriously wrong with RA’s financial policies and practices.

As this op-ed highlights, nothing happening now in Tetragate ameliorates those concerns about the way RA and the Board are handling our money.