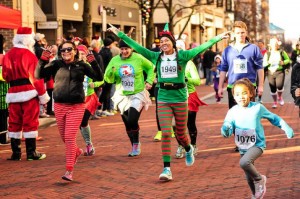 A new study says Fairfax County and its western neighbor Loudoun are some of the happiest places in America.

In its second annual survey, the financial website Smartasset.com looked at nearly 1,000 counties with populations of 50,000 or more. Smartasset then looked at eight factors, some positive and some negative.

The positive factors were each county’s marriage rate, income ratio (the ratio of median income to cost of living), life expectancy and physical activity rate (the percentage of the population getting adequate physical activity each week). The negative factors were each county’s poverty rate, unemployment rate, divorce rate and personal bankruptcy rate.

Here is what Smartasset found:

No. 1 — Loudoun County takes the top spot for the second year in a row. The unemployment rate and poverty rate are both under 4 percent. Smartasset says Loudoun’s poverty rate was the lowest of any county in the study. Also, Loudoun’s income ratio is over 2.5, which means the median income is more than twice the cost of living.

Loudoun came in with a happiness rating of 1oo, partly due to a 3.2 percent unemployment rate, a 3.8 percent poverty rate and a life expectancy of 82.6 percent, the study showed.

No. 2 — Fairfax County, which is “one of just three counties in our study to have a life expectancy over 83 years,” says Smartasset.

The median income in Fairfax County is high, at $100,584. That’s almost twice the national median income. That’s impressive since the county’s population of 1.1 million is greater than that of eight states and the District of Columbia. Still, the poverty rate is 6 percent.

Fairfax’s unemployment rate is also 3.2 percent, according to Smartasset’s numbers. The county’s physical activity rate scores above 52. Overall, Fairfax received a mark of 99.96.

See the full ratings scale and the top 25 counties on Smartasset.com.

Rounding out the top 10:

Photo: Fairfax County has one of the highest physical activity rates, which contributes to the happiness scale, says Smartasset.