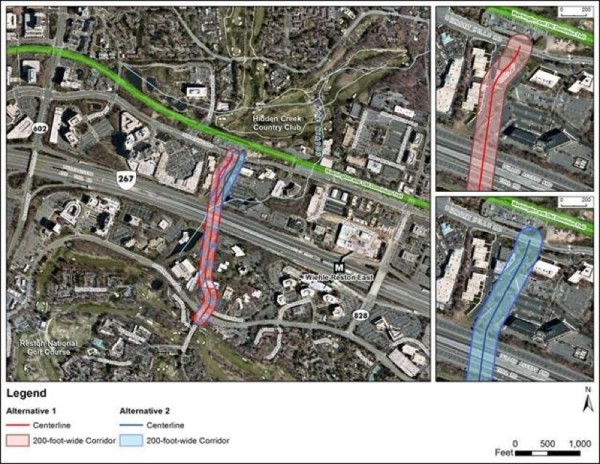 Coming eventually to south Reston: an extension of Soapstone Drive that will provide an additional crossing of the Dulles Toll Road for cars, pedestrians and cyclists.

The Fairfax County Department of Transportation project was approved by the Fairfax County Board of Supervisors in 2014. Officials held a briefing last October, where they said major funding has not been identified and an environmental review will not be completed until fall of 2016.

Officials will give a progress report on the environmental analysis Wednesday, June 15 at South Lakes High School. The meeting is from 6:30 to 8:30 p.m., with a formal presentation at 7:30 p.m.

Having an additional crossing of the toll road will help alleviate traffic, particularly along Wiehle Avenue at Sunset Hills Road and Sunrise Valley Drive. It will also provide direct access for buses across the Dulles Corridor and to Wiehle-Reston East without requiring travel on Wiehle Avenue and offer improved connectivity for pedestrians and bicyclists to the Metro station from points north and south of the Toll Road.

An exact price tag won’t be known until the connector is farther along, officials have said.

According to the preliminary plans, the road, which will have three lanes approaching the bridge and four lanes on the bridge, will require demolition of several office buildings on Association Drive.

Check out this Soapstone Connector Feasibility Study (2013) for more information, as well as a county information page with the most recent presentations.