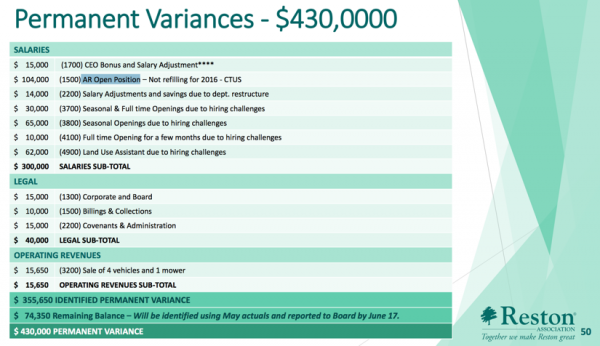 Reston Association CEO Cate Fulkerson says she will forgo $15,000 of her own salary raise and potential bonus as part of cost-savings measures to help make up for the $430,000 deficit caused by the Lake House renovation project.

That move is part of more than $355,000 in money-saving moves Fulkerson presented to the RA Board at an operations and budget meeting Saturday. Fulkerson said Wednesday she expects to find an additional $75,000 or more in permanent variances by the end of the month.

RA purchased the Lake House, then known as the Tetra building, for $2.65 million in July 2015. But costs soon began mounting, and RA’s Board of Directors voted in late May to move $430,000 from its operating fund to cover the Lake House overrun.

The deficit was caused by several factors, including the previous tenant opting not to rent back through 2016 and renovation costs that were far more expensive than forecast.

Fulkerson says there was $900,000 available in RA’s Operating Fund prior to moving the $430,000. She says it is her intent to put the $430,000 back in the fund without sacrificing any level of service for the organization.

Among some of the expected cost savers (see chart attached to this post for more specifics):

Fulkerson said some of the $40,000 in legal savings can be found by working with members to make repairs rather than referring violations directly to the legal department.

“That has resulted in far fewer cases going to court,” she said. “That saves money.”

Fulkerson said RA found more than $15,000 by selling four vehicles and one mower after newer models were purchased.

Fulkerson has previously said she would be working to find efficiencies and redundancies to have a more streamlined (and money-saving) way of doing business.

She said she expects to find further variances for savings by RA’s June 23 meeting.

Meanwhile, the RA Board will also discuss at that meeting how best to organize a task force — either community volunteers or a paid consultant — to do a thorough investigation into how the Tetra/Lake House cost spun out of control so quickly.