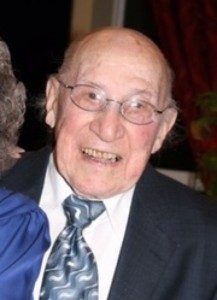 Manny Hershkowitz, a longtime Reston resident who was known for his active pursuits as a retiree, died last month at Ashby Ponds in Ashburn. He was 99.

Manny and his wife, Ruth, lived in Reston for more than 30 years, relocating from New York in 1974 to be near grown children.

At age 82, Manny became the oldest ball boy to work the U.S. Open tennis tournament in New York. That earned him a spot in the Guinness Book of World Records.

Manny retired twice — from the fur industry in New York and later as a furniture salesman at Bloomingdales at Tysons Corner.

“I think being so active keeps me young,” Hershkowitz told the Washington Times in 2003. “I think age is a state of mind.”

He was a World War II veteran and was married to Ruth Hershkowitz for 73 years. They had three children, five grandchildren and four great grandchildren.

Donations may be made in his memory to the Ashby Pond Scholarship Fund or the Northern Virginia Hebrew Congregation Religious School.