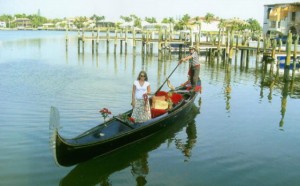 Editor’s note: The gondola rides have been postponed and will not occur in July, a Lake Anne spokeswoman says. Watch for a big event included the boats at Lake Anne later in 2016 or in 2017.

Original Story: It’s a go for a gondola at Lake Anne Plaza.

Surf Reston Stand Up Paddleboarding has received approval from Reston Association to have a two-week run at Lake Anne with a 36-foot gondola that was built in Venice.

The gondola will be here July 22-31. Surf Reston is now taking online reservations.

The Italian seaside city of Portofino was one of the inspirations for Lake Anne Village Center. James Rossant designed Lake Anne to emulate the Italian coastal town of Portofino with modern architectural themes.”

Rides on Lake Anne will be about 30 minutes and can accommodate up to four passengers for $49.

The gondola, which will be steered by a gondolier, is coming from a New Jersey company, says Surf Reston owner Steve Gurney. If successful, it may become a permanent Lake Anne feature.

“This short-term demonstration project can provide the community with a better indicator of the demand and the community’s desire to support this service through a summer season,” he said.