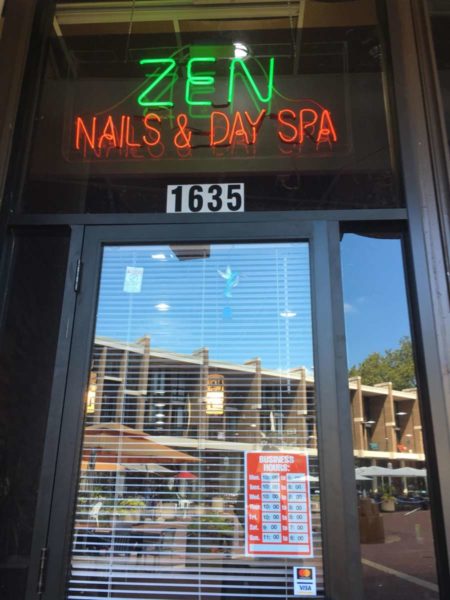 A new salon is coming to Lake Anne Plaza soon.

County permits indicate that the salon, which is listed as “My Salon” in documentation, will open up at 1613 Washington Plaza.

An application for interior changes was processed by the county on Feb. 12.

The space was previously occupied by Zen Nail and Day Spa, which moved a few doors down from its current location in 2018, a business representative told Reston Now. That spa is now located at 1635 Washington Plaza.

No word yet on when the new salon is expected to open. 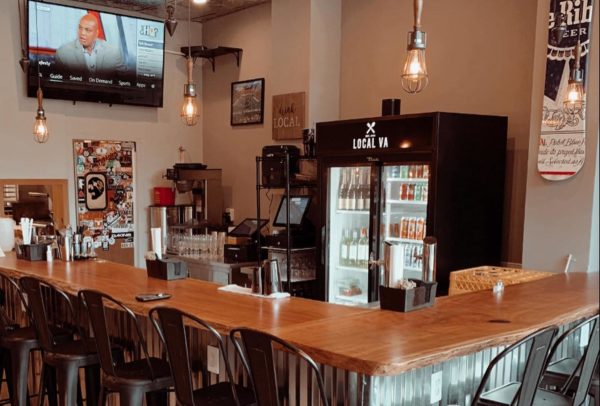 The business takes the place of a Thai restaurant that closed last year at 1633 Washington Plaza.

The menu isn’t available to preview yet, but at a soft opening earlier four days ago, customers said the menu included steak frites, wings, macaroni and cheese, as well as other items. 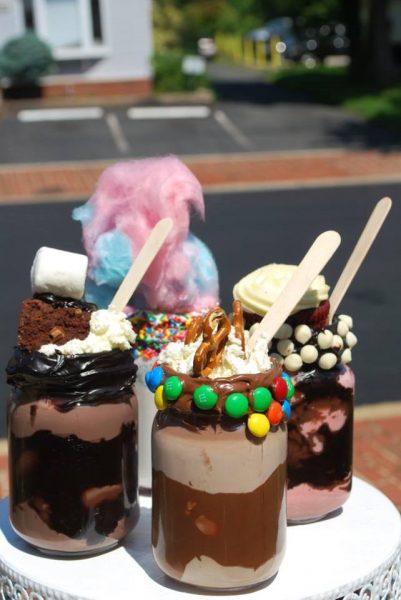 Editor’s Note: This article was updated with new information about the temporary closure and comment from the owner.

Kiln & Co., a paint-your-own-pottery studio that also serves up custard, has temporarily closed for renovations, according to company owner Sarah Selvaraj.

The company, which first opened at Lake Anne Plaza in 2017, plans to reopen by the spring or summer of this year. Selvaraj said it is not unusual for the business at Lake Anne to go on hiatus for the winter.

The Reston location was forced to close overnight on Sept, 11 last year due to water damage. “We might have a relocation within Lake Anne due to the infrastructure issues as indicated…  and if the real estate was sold,” she stated.

Here’s more from the company:

Lake Anne has been part of the Kiln & Co family ever since our first 2016 pop up covered by RestonNow’s Karen Goff on June 16, 2016. My relationship with Lake Anne dates back even before opening my first store. I have taken several sculpture classes and ceramic classes at the Reston Community Centre with amazing instructors like Guy Zoller and Marianne Cordyack that teach there to this day.

As of yesterday (Thursday), the company’s website lists the Reston location (1631 Washington Plaza-N) as “closed.”

Late last year, the owner expressed concerns about the lack of upkeep and maintenance at the plaza and several businesses. 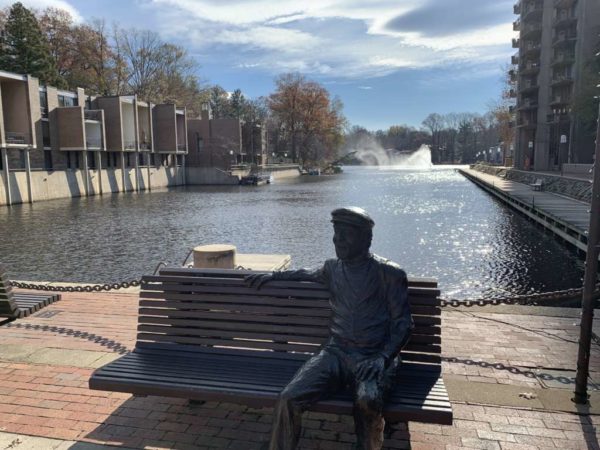 Patrons of Lake Anne Plaza can enjoy a “Small Crawl” on Saturday, Nov. 30.

During the event, participants can join a group crawl — or walk — around the plaza to enjoy samples from several businesses.

The walk begins at the bronze sculpture of Reston’s founder Bob Simon and takes participants to the following businesses, which will offer special selections from the products they offer:

The event takes place all day on Saturday in honor of Small Business Saturday. 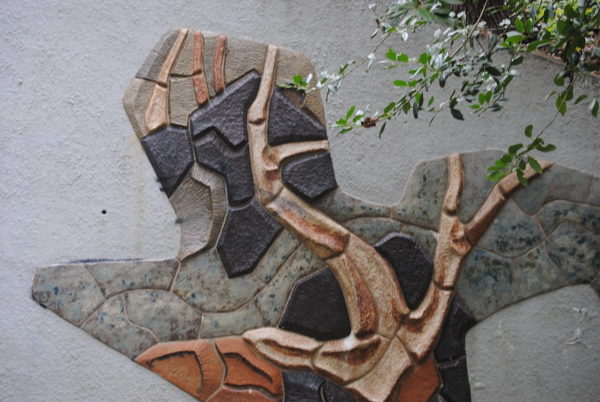 Lane and Ramp Closures This Week — Several ramp and lane closures are planned this week due to ongoing work on the extension of the Silver Line. Changes are planned along the Dulles Toll Road, Sunrise Valley Drive, Sunset Hills Road and Moran Road. [Dulles Corridor Metrorail Project]

County Plans to Repurpose Unused Parking Spaces at Malls — “A proposed Fairfax County amendment aims to lessen the parking requirements for large retail centers, allowing unused parking lots to be repurposed. It’s an issue the county has been talking about for the past year and a county report said there’s been a decline in shopping malls since the 1990’s.” [WUSA 9]

Reston Witches Rules the Water on Hallow’s Eve — A playful coven of Halloween witches on stand up paddle boards skim the waters of Lake Anne to kick-off an evening play and spooky brews. [The Connection] 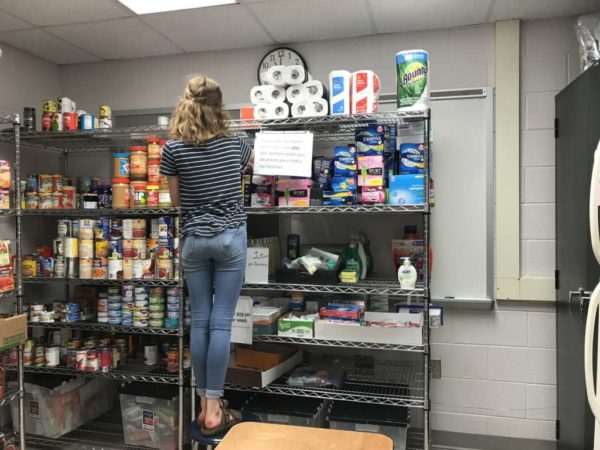 The South Lakes High School PTSA is sponsoring a 0.5k run to help support the school’s food pantry this Sunday. From 3-5 p.m.

Proceeds from the event will go directly toward the pantry, which provides students in the SLHS pyramid food and toiletries.

The run is titled, “The Best 650 Steps You’ll Ever Take.”  The run begins and ends at the Lake Anne Brew House, with a stop in between for donuts and water.

To prepare for Halloween, organizers will be offering medals for the biggest team, best costume, most exuberant, best-dressed team and any other categories the judges “deem worthy,” according to organizers.

Registration is open online. Individuals can register as a student, adults, teams or families.

Raffle prizes include a diamond necklace with a value of $1,500 that was donated. Aspen Jewelry Designs. Other prices include a gift basket from Custom Ink, peanut putter basket, gift cards and a massage by Meg Donnelly.

A gourmet dive bar that originally planned to open over the summer will likely open at Lake Anne Plaza next month.

Owner Dylan Clark told Reston now that Local VA, plans to open by late November. The bar will be located at 1633 Washington Plaza-N.

Other details about the business have been under wraps. The business replaces Sing Thai, which closed in March. 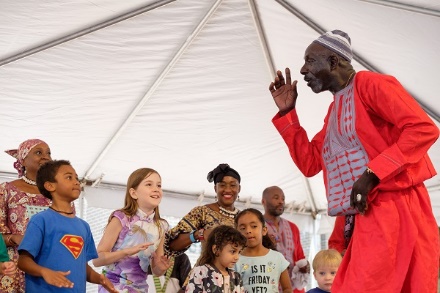 The annual Reston Multicultural Festival is set to celebrate the community’s rich diversity tomorrow (Saturday) from 11 a.m. to6 p.m. at Lake Anne Plaza.

The festival offers a mix of song, food, dance and art at the plaza. It is hosted by Lake Anne Plaza and co-sponsored by Reston Association.

Attendees are encouraged to dress in their multicultural attire at the free festival. This year’s event includes a naturalization ceremony, three performance stages, family arts and crafts, a global cafe, and a global market.

After more than a year of restoration and fundraising, the Reston Historic Trust & Museum has installed new historic icons to honor Lakeside Pharmacy, one of the first businesses to open at Lake Anne Plaza.

The pharmacy, which operated in the plaza for nearly 50 years, closed after owner and pharmacist Larry Cohn retired in 2014. The icons, which were previously used to advertise for the pharmacy, were removed last year to make way for new businesses.

The new icons were installed a few steps away from their original location, despite a cease and desist request from the owner of Kiln and Co., a pottery business that also serves up frozen yogurt and is located next to the exhibit.

Sarah Selvaraj, the owner, said the installation of the icons on the wall — which is showing signs of disrepair — could cause further damage to area businesses. The museum did not formally respond to a Sept. 12 letter from Selvaraj’s attorney and a declined to offer public comment on the issue.

Hirad Najafbagy offered a significant donation in honor of his parents, Hooshang and Farah Najafbagy, who operated Calvert Gourmet Shop at the plaza for many years after immigrating to the United States. The exhibit was installed earlier this week with the help of Krohn Design and Capitol Museum Services.

A ribbon-cutting to celebrate the museum’s 22nd anniversary and the dedication for the new exhibit was held yesterday (Wednesday). More than 80 donors helped make the new exhibit possible. 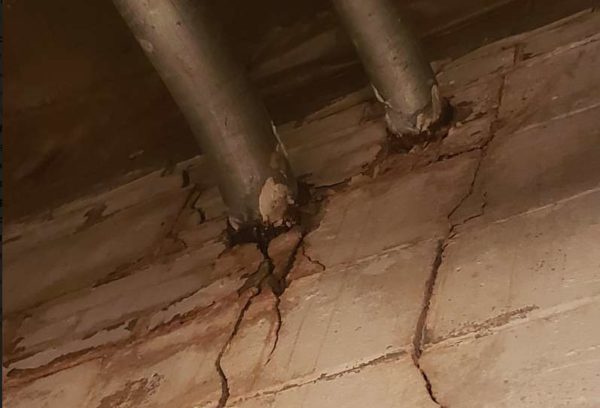 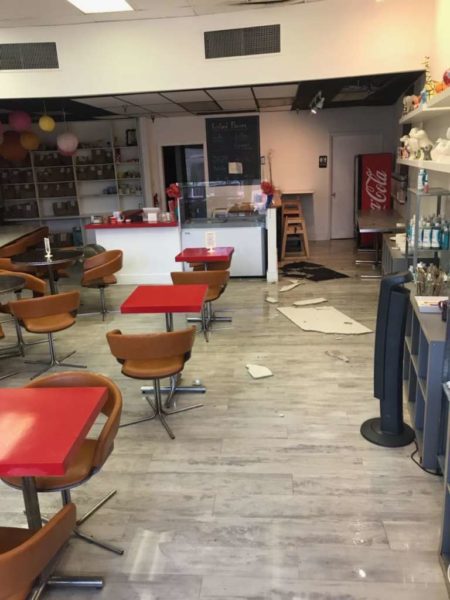 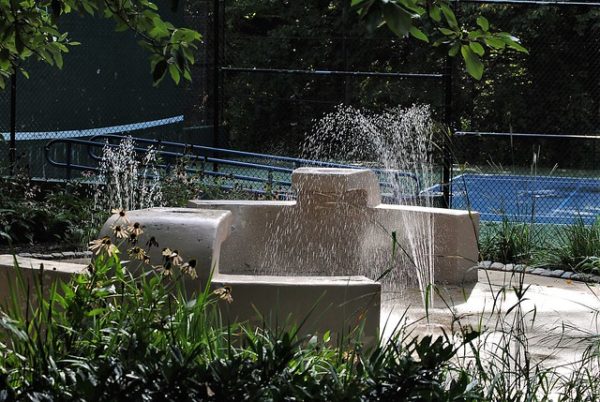 The first-ever Lake Anne Stand Up Paddle Board Triathlon is set to take place on Sunday (September 15) at Lake Anne Plaza from 10 a.m. to 2 p.m.

The event is completely sold out, but volunteers are needed and attendees are welcome to watch the festivities.

Performers and activities at this year’s annual Reston Multicultural Festival, which is set for September 28 at Lake Anne Plaza, are centered around the theme, “Discover the World in Reston.”

“At the Reston Multicultural Festival each year, people enjoy the fruits of that inclusive and celebratory approach to building community,” said RCC executive director Leila Gordon.

The festival kicks off at 11 a.m. with a naturalization ceremony and a performance by New Line Brass Band at 12:15. p.m. A series of performances will following the show by the band, including dance and music from countries like India, Bolivia, Japan and Ireland.

This year’s festival also features two fellows from the National Endowment for the Arts: Cajun musician Michael Doucet and African American storyteller Linda Gross. Doucet performs on the world stage from 12:45 p.m.. to 1:30 p.m. and Goss performs at the gallery stage from 1:45 to 2 p.m.

Free parking is available at the upper and lower lots at Lake Anne Plaza, on North Shore Drive, and off-site at Brown’s Chapel.

The event is hosted by Lake Anne Plaza and co-sponsored by Reston Association. 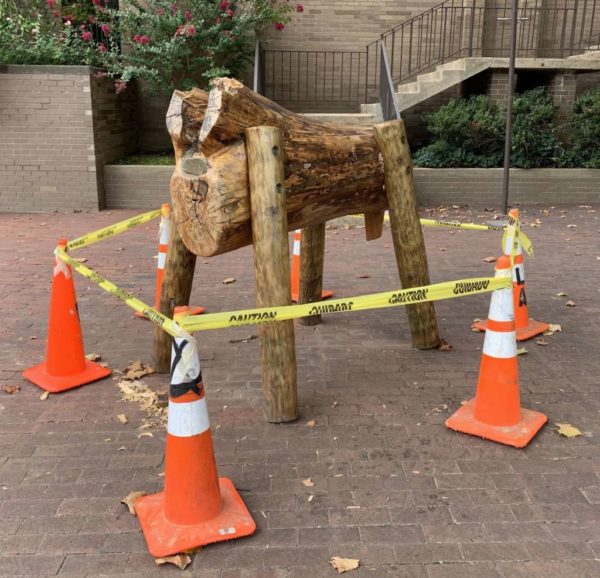 The mystery of the headless horse has wound its way to Lake Anne Plaza where the head of a piece of public art mysteriously disappeared late last week.

The head of “The Wooden Horse,” which was constructed by Reston artist Marco Rando, no longer rests atop the commissioned art. The horse is inspired by the Lake Anne original of the same name, which was created by artist Gonzalo Fonseca in 1965.

While some have posited the situation amounts to a beheading, folks from businesses at the lakefront believe insects gradually hacked away at the horse’s neck, resulting in the unfortunate fall of its head. Thus far, no official cause has been confirmed.

After a brief stop at a local museum, the head has returned to the hands of its maker. Rando is working on finding ways to restore the horse to its former glory. 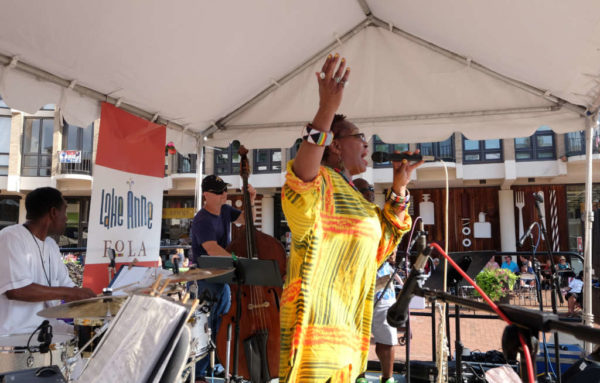 The festival features an afternoon and evening of jazz on the lake. It takes place from 1-8 p.m.

The following performers are set to take part in the festival, among others: