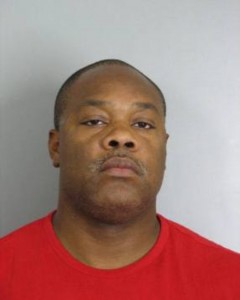 Fairfax County Police arrested an alleged regional heroin dealer at the Exxon on Wiehle Avenue near Isaac Newton Square in Reston on Wednesday.

Clarence “Nephew” Dickerson, 39, of Washington, DC, was stopped by police at the service station — located next to Fairfax County Fire and Rescue Station 25. In his car, police found heroin, crack cocaine, scales, packaging material and “other items commonly used in the distribution of illegal narcotics,” police said.

Based on evidence from an informant, police said they had been observing Dickerson for some time.

“The Organized Crime Narcotics Division (OCN) has been conducting a long term investigation into the distribution of heroin in Fairfax County,” FCPD said in a statement. “Based on evidence obtained during the investigation a suspect was identified as ‘Nephew’ who was allegedly selling heroin in several areas of Fairfax County. ”

“As the investigation progressed, ‘Nephew’ was identified as Clarence Dickerson, a 39-year-old, black male, of 57th Street SE, Washington D.C.  A confidential informant was developed and purchases of heroin were made in various areas throughout the county.”

Police then obtained arrest warrants for Dickerson, charging him with five counts of distribution of heroin.

The FCPD helicopter was used as part of the surveillance during the investigation, police said. This led to the discovery of a consistent pattern in Dickerson’s distribution habits. A buyer was identified in the Town of Vienna, as well as at a business on Richmond Highway.

After Dickerson was arrested in Reston, officers with the United States Park Police executed a search warrant for OCN at Dickerson’s house in DC Wednesday. They seized cocaine, heroin, a 9 mm handgun and an undisclosed amount of U.S. currency.

Dickerson was transported to the Fairfax County Adult Detention Center where the initial five warrants were served. Two additional warrants were obtained and served, charging Dickerson with possession with the intent to distribute cocaine and heroin. He is currently being held on no bond.  Additional charges are being considered, including federal charges, police said.