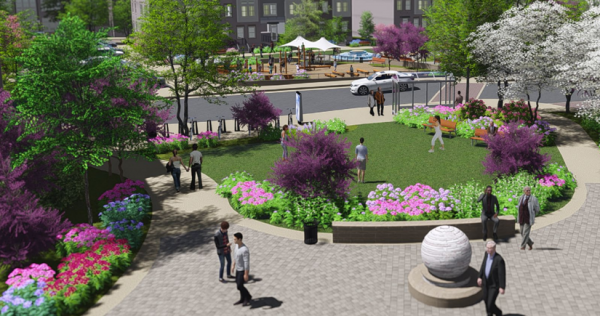 The planning commission held a public hearing on JAG’s plans for 156 homes, 8,500 square feet of retail space and about 6,000 square feet of office space last week. However, the commission deferred a decision until last week so some development conditions and contributions could be met.

One of the conditions: Reston Association’s request for money to improve the Tall Oaks Pool, which is across North Shore Drive from the village center.

After more than a year of meetings and community discussions — some of which turned argumentative as some neighbors still held out hope to continue primarily retail at Tall Oaks — the plan now moves to the Fairfax County Board of Supervisors for final approval on July 26.

“I know there are some folks who are not happy that Tall Oaks will become a village center with significantly more housing,” said Frank de le Fe, the planning commission’s Hunter Mill representative who also is a resident of the Tall Oaks area. “But those of us who have lived here the last 35 years know [Tall Oaks] is in the process of dying. Hopefully, this will rejuvenate the village center.”

The new Tall Oaks will have 156 residences (44 townhomes; 42 two-over-two townhomes and 70 multi-family units in two buildings); open and recreational space; and “neighborhood-serving” retail, such as a coffee shop or other quick-service restaurants.

Tall Oaks is currently only 13 percent occupied, but the businesses there (Mama Wok, Paisano’s Pizza, Paradise Nails, among others) have shown interest in staying in the new neighborhood, JAG reps have said.

What the new Tall Oaks won’t have: a supermarket. JAG reps have pointed out several times that one of the reasons for the village center’s demise over the last 10 years was the departure of Giant in 2007. That was a small store, and though it served the neighborhood well in the 1970s and 80s, by the 1990s and beyond there was major competition from nearby North Point (Giant), Reston Town Center, the Spectrum (Harris Teeter), Plaza America (Whole Foods) and Trader Joe’s.

JAG conducted several studies showing a grocery store would not be viable at Tall Oaks.

Over the last 15 months, JAG has responded to some of the other community concerns, however. The developer has tweaked the plan several times to enhance community gathering space, which was the original vision for Reston’s village centers. The new plans include an outdoor amphitheater, outdoor fitness stations, and a children’s play area incorporating natural materials.