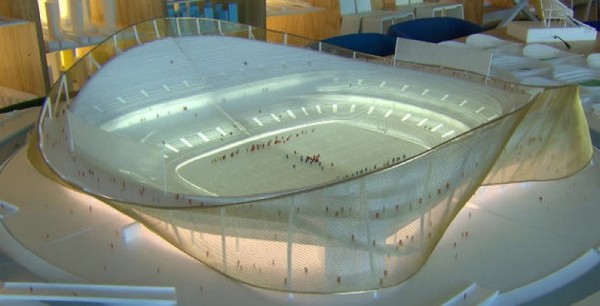 Correction: An earlier version of this post had an incorrect stadium rendering/model attached to it.

Virginia Gov. Terry McAuliffe said on Friday the commonwealth is in “very serious negotiations” with the Washington Redskins to build a new stadium — possibly in the area along Metro’s Silver Line.

McAuliffe said on ESPN 980’s “Cooley & Kevin” show Friday he hosted team owner Dan Snyder and franchise officials at the governor’s mansion Thursday night. The team is in Richmond for training camp until next week.

McAuliffe said a stadium site in Virginia would be located near a Metro station. In the interview, he listed areas along the Silver Line, including Tysons, “Reston/Wiehle, and then to Dulles Airport with the Silver Line, and then further into Loudoun.”

The second phase of the Silver Line, which will run from Wiehle-Reston East to Dulles and into Ashburn, where the team currently trains, will be complete in 2020.

While areas west of Reston may have available land suitable for a stadium, there is virtually no space in Reston that could accommodate a stadium and associated parking.

Meanwhile, the team is locked into a lease at FedEx Field in Landover, through 2027. However, Snyder has already hired architects at Bjarke Ingels Group, which has worked up concept drawings.

McAuliffe said Virginia’s booming population and a strong economy are among reasons why Virginia should be the stadium location.

He also mentioned that the majority of season ticket holders live in Virginia, as do most of the players because the team trains in Ashburn.

“We have plenty of land, obviously, to do this. … If I’m looking to put a sports team, where are most of my fans? Where’s most of my income come from? Where do all my players live? That’s Virginia,” McAuliffe said. “So, I think from the team’s perspective, looking at it that way is important.”