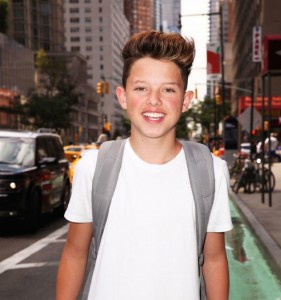 Jacob is 13. He lives in Reston, where he got his start both in local theatre productions and making videos on his block and in his basement.

Some compare Jacob to a young Justin Beiber — he’s got the good hair and the boy-next-door looks. He can sing — and he certainly knows how to work it.

Jacob Tweets daily affirmations that have struck a chord with tweens seeking a positive message in a critical world, such as “Hey, be yourself,” or “Girl, you’ve got something special.”

Girl you got something special 😘

Jacob was up at the offices of Seventeen magazine in New York City this week as his latest video, “Hit or Miss” was released.

Here are some of the highlights:

What was the inspiration behind “Hit or Miss?”

Ultimately, it was written about just having a great time. You can’t worry about the next day. If you’re going through something hard, just remember that tomorrow could be 10 times better. It’s about not taking life too seriously and just being able to let go and have a great time.

You’re very popular on social media, especially musical.ly. How did you initially get into making musical.ly videos?

I was in my bedroom and my friend from Baltimore told me about this app called musical.ly, and I went straight to the app store and downloaded it. I had no clue what it was. I just downloaded it. I think I was one of the first people on the app. My friend recorded it and I was just goofing off in my room and it really took off. That took like a minute to film. The bigger that my musical.ly got, the more effort I put in, because I wanted people to see the best content and I tried to work the hardest I could for them.

But, like any Internet star, Jacob faces backlash too. Read this Buzzfeed story on on the online bullying Jacob has to endure as well. Yes, an Instagram post may get thousands of comments, but not all of them are positive.

And there is this bizarre game where kids post phone numbers in the Instagram comments and swear it’s Jacob’s phone number — “just talked to Jacob — he is so nice!” Somewhere out there, some random phones are getting inundated with calls looking for Jacob.