Getting ready to celebrate the upcoming Labor Day holiday? Here’s something to temper your mood: you might also want to get ready to spend more time stuck in traffic later this month.

You might have heard the term “Terrible Traffic Tuesday,” which refers to the supposedly awful traffic on the Tuesday after Labor Day, when kids are back in school and workers are back from vacation.

But researchers at the National Capital Region Transportation Planning Board, a planning board for the Washington, D.C. area, say that Terrible Traffic Tuesday is actually not that terrible on average. It’s the days after and the following week that are more congested than at any time in August.

TPB calls it the “September Shock.” 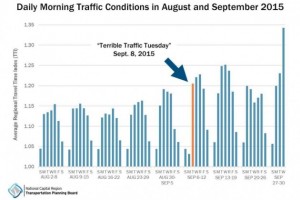 “Expect to see more traffic and increased travel times,” the organization said. “For everyday travelers, the extra delay can add up to hours of extra time spent in the car each week. Regionally, added up across all travelers, it amounts to a drain on productivity and economic competitiveness.”

“The annual jump is so consistent from year to year that the TPB analysts say it’s one of the most predictable and pronounced traffic events the region sees. Their analysis also revealed that September is consistently one of the region’s top two or three worst traffic months.”

The “shock” may not also affect the area equally. Some roads see worse traffic than the regional average, while others could even experience slight improvements, researchers said.

Maps provided by TPB show that across the area, the most severe increases in traffic congestion — upwards of 50 percent increases travel times — typically happen later in the morning rush hour, around 8-10 a.m., on major routes and highways.