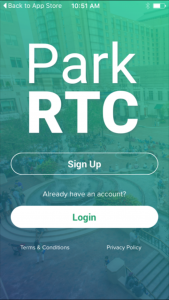 While the postponement until January of the app-based paid parking system ($2 an hour on weekdays) may seem like a victory for those in favor of free parking, it is only a temporary one.

A source familiar with the thinking of Boston Properties, which owns town center, says there is “no indication” to amend the plans, which feature the app; a safety component called LiveSafe; a complicated Bluetooth-enabled validation feature at some merchants; the ability to pay by cash or credit card at four kiosks; and wayfinding systems to determine locations of available spots.

According to the source, the backlash from thousands of consumers (both in an online petition and in comments of Reston Now and other news and social media sites) had nothing to do with the delay.

Rather, the system is complicated (also a top complaint from users, along with privacy concerns). Boston Properties said it needs additional time to “educate” merchants and Reston Town Center visitors how to use it.

“Boston Properties wanted more time for outreach,” said Rob Weinold, the communications rep hired by the RTC owner for the parking rollout, which has been scheduled to be put in place on Sept. 12.

“We will be working with merchants,” he said. “We will be doing outreach at events such as concerts. We will update out FAQs on our website and doing ads and promotions. We need to get people more comfortable with the technology.”

As of Thursday, about 6,500 people have downloaded the ParkRTC app, Weinhold said.

But at least that many are likely saying they refuse to download the app because privacy concerns. Still more are saying they will avoid the town center altogether when they have to pay to park.

And still more take issue with the idea that they need more instructions and education, as Boston Properties said earlier this week.

Really? We don’t need no education (to quote Pink Floyd). We’re just not going to add this app on our smart phones. … and we’re not going to pay to eat and shop. Period. …

Additional time to educate customers? It’s truly hilarious that Boston Properties thinks the public believes this baloney. They are just worried about losing revenue from holiday shoppers. The fact that they had to start a gift card raffle in order to entice people to download the app speaks volumes. …

I think it is Boston Properties that needs some education. We the consumers know what we want…free parking. Perhaps they will get it when their tenants move out because they are losing the foot traffic they depend on.

What say you? Will additional time and instructions make pay parking easier for you? Or have you gotten the message loud and clear already?