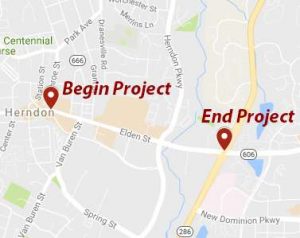 Virginia Department of Transportation (VDOT) officials will hold a public meeting Thursday to show its place for a proposed design for the widening of Elden Street between Monroe Street and the Fairfax County Parkway in Herndon.

Officials hope the project will reduce traffic congestion, improve safety and enhance access to and from the busy Fairfax County Parkway.

Other planned improvements include a new raised median with streetscaping between Van Buren Street and Herndon Parkway, moving utilities between Monroe Street and Fairfax County Parkway underground, and replacing the culvert over Sugarland Run with a new bridge.

VDOT officials say they hope to have plans approved by the spring, though it could take a few years to receive authorization for right-of-way funding, and to advertise to potential construction companies for the job. All in all, construction could begin in the spring of 2022.

The total costs of the project, including preliminary engineering, right-of-way and construction, add up to just under $35 million.

Thursday’s meeting will take place at the Herndon Senior Center, located at 873 Grace St. The public is invited to drop by to view the plans and talk with officials anytime between 6:30 to 8 p.m.