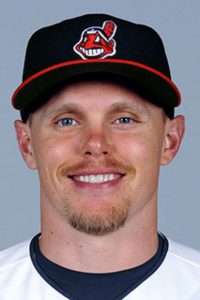 The Cleveland Indians got off to an early lead in Game 1 of the 2016 World Series Tuesday when outfielder Brandon Guyer was hit by a pitch to force in the Indians’ second run. The Indians went on to crush the Cubs 6-0 and take a 1-0 lead in the series.

If you are looking for a local guy to cheer for, Guyer’s the one.

Guyer, 30, is a 2004 graduate of Herndon High School, where he also was a star tailback for the Hornets. He is still remembered for scoring seven touchdowns — a school single-game record — in the 2003 Homecoming game against West Potomac.

But back to baseball. Guyer was part of the Hornets 19-4 Concorde District championship squad in 2002, which was the last time Herndon won a district title. As a senior, he had 23 RBI, a .483 batting average and was walked 19 times.

He went on to play at the University of Virginia, and then moved through the minors. He briefly made an appearance with the Tampa Bay Rays in 2011, hitting a home run in his first at-bat against Baltimore.

By 2014, he was back in the majors for good. In 2015, he led the American League in being hit by the most pitches. The Major League single-game record for being hit by pitches is three, and that has happened to Guyer several times, most recently on April, 21 2016. That’s why they call him “La Piñata.”

Guyer — who is married to former Fox5 sports anchor/reporter Lindsay Murphy — was traded to the Indians on Aug. 1.

Look for Guyer as the series continues Wednesday in Cleveland. Game times is 7 p.m. on Fox5.