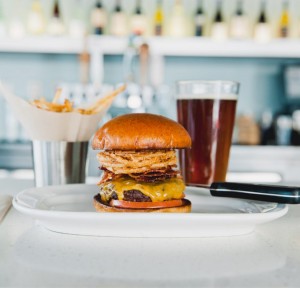 This is an op-ed submitted by George Mason University student Jalen Stubblefield. It does not reflect the opinion of Reston Now.

I grew up in Alexandria, VA and have lived here the vast majority of my life. I graduated from Edison High School in 2012, and will graduate from George Mason University this December. I am a Democrat and I oppose the Fairfax County Meals Tax. Here is why.

First and foremost, I understand that enrollment in schools has risen, and that teachers are severely underpaid. I understand the important role public education plays in America, ensuring that every child that works hard has the opportunity to succeed. What I do not understand is a Meals Tax.

Attending school at Edison, I had a number of friends that were growing up without parents in their household. No, the parents had not left them. They were working from early in the morning, sometimes before school started, to late at night, sometimes long after their children had slept.

Take my friend, we’ll call him Josh, his parents would drop him off long before school began, and he would walk home in the afternoon because his parents were working. For food, he was on the free-and-reduced meals program, and his parents would give him $5 for dinner since there was no time for them to cook during the week.

Josh’s story is typical. According to a report by the Commonwealth Institute,  8 percent of school-age children are growing up in poverty and 28 percent are on the free-and-reduced meals program.

Some are growing up in single-parent homes, or homes where both parents work and often times are required to eat out. Many families do not have the luxury of having a “stay home parent” anymore that can ensure that a home cooked meal is prepared for dinner. But families do have hard-working parents, who labor many hours a day, doing everything possible to ensure that their children are taken care of.

It is important to note that the definition of poverty is uniform across the United States, while the cost of living is not. This means that while there are only 65,000 people living in poverty, half of which are children, that the number of people struggling to make a living is significantly higher.

Most Americans would agree that the government spends wastefully at all levels (how much is up for debate), however people already struggling to make a living do not have money to spend wastefully. For some, a meals tax would not increase the cost of food, but decrease the amount of food on their plates.

If the county is as desperate for money as they claim, there are other ways to increase revenue. According to a report by the Commonwealth institute, a one-cent increase in the property tax rate can raise nearly 22 million dollars. Not only would it generate revenue and affect all residents evenly, but it could also be written off in Federal taxes, negating the increase for some. Nobody should go hungry, but that would be the tough reality for some if this tax were to pass.