This is an op-ed submitted by Terry Maynard, co-chair of the Reston 2020 committee. It does not reflect the opinions of Reston Now.

The Transportation Service District (TSD) proposed for Reston’s station areas calls for homeowners there to subsidize developers as they build private roads on their property. With a projected balance in residential and non-residential development in the station areas, that means residents there would be paying between $55-$88 million in 2016 TSD tax dollars to developers to build roads on their properties over the next forty years depending on the initial TSD tax rate and if it remains constant (which it won’t). 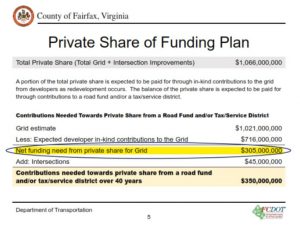 In an incomprehensible move, the Fairfax County Department of Transportation (FCDOT) has identified a phony $350 million “funding gap” for Reston road improvements requiring the creation of a TSD. As laid out in its September 30, 2016, presentation to station area developers, the so-called RNAG “stakeholders,” $305 million of the funding shortfall is to pay for the construction of their “grid of streets.” That’s 87% of the total TSD funds and some 30 percent of the grid’s $1 billion total cost.

This “grid of streets” is the network of privately built roads on developer-owned property. They may be turned over to the state upon completion, but that is not at all clear. Station area residents–present and future–just get to pay developers to build them if this TSD proposal is approved. In contrast, the Tysons “grid of streets” is being paid for in its entirety by developers through financial contributions ($304 million) or in-kind contributions ($561 million); not a penny of Tysons TSD tax revenues.

This subsidy to the for-profit endeavors of developers of scores of millions of residential tax dollars suggests that the developers’ effort really won’t be that successful. However, our analysis of scope of profits for developers across the station areas over the next forty years, based on Boston Properties 2015 annual report, indicates they will have a net operating income averaging in excess of $1.1 billion per year in 2015 dollars. That’s $45 billion in profits over the next four decades. And yet the proposed tax suggests developers’ need residents’ financial help for some reason to build their roads themselves. We don’t think so.

The economic question above only accentuates the unfairness, even immorality, of forcing residents to to pay taxes to support commercial for-profit development. We don’t think the idea comes remotely close to passing a decency test, especially in light of developers’ anticipated profits. We recognize we are dealing with politics here, but it still leaves a strong stench.

As we have said here and elsewhere, there is no need for a new Reston road tax of any kind. This is especially so when a large chunk of it is intended to go into the pockets of developers. Moreover, the so-called “funding gap” is a mirage, even a fraud, created by the County to justify creating a new tax gimmick to afflict Restonians.

You can help stop this dangerous Reston road tax idea. First, Reston 20/20 has posted a petition on Change.org calling for a stop to passing this new tax that you can sign. Second, attend and participate in the RNAG community meeting on Nov.  7 at 7 p.m. in the South Lakes High School lecture hall. Third, let Supervisor Cathy Hudgins know about your concerns over the Reston TSD proposal.

Finally, attend and testify at the Board of Supervisor’s hearing on the matter, which has yet to be scheduled.

If we all work together, we have a chance to stop this unfair, unneeded County tax boondoggle.