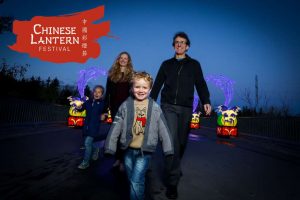 Reston residents will be able to bask in the glow of handcrafted Chinese lanterns during a festival at Roer’s Zoofari in Vienna later this month.

The zoo (formerly the Reston Zoo at 1228 Hunter Mill Road) at is ready be filled with more than 40 lantern sets and 800 bright displays as part of its ongoing Chinese Lantern Festival starting Nov. 16.

Visitors will be transported throughout the world as they walk among Chinese lanterns shaped like lions, tigers, monkeys and even dinosaurs.

Touted as “a modern take on the ancient art of lantern-making,” the festival will include artisans, craftsmen and performers. In addition to viewing the glowing artwork displays, visitors can watch live martial arts shows and shop for souvenirs and gifts made by folk artists.

“Twenty artists from China will work on-site at Roers Zoofari for weeks in a temporary ‘lantern factory’ to create exquisite scenes that include animals from throughout the world,” reads a press release for the event. “From lions to dinosaurs, giraffes to whales–even a herd of zebra’s–figures will form dreamscapes of color and motion.”

The Chinese Lantern Festival will run from Wednesday, Nov. 16 through Sunday, Jan. 1. Tickets are $25 for adults and $15 for children over 3.