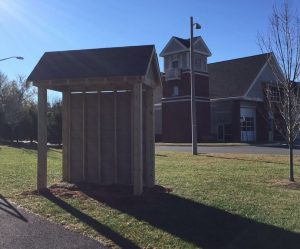 A nearby stretch of road is getting a much-needed covered bus stop, thanks to volunteers from the Fairfax County Fire and Rescue Department and donations by local organizations.

Capt. Gery Morrison and his colleagues from Fire Station 42 (Wolf Trap) said the spot directly across from the firehouse, at Beulah Road and Route 7, has needed a covered bus stop for some time to help shelter people from inclement weather as they wait.

“The current stop is just a posted sign that sits in a ditch along the heavily traveled corridor of Route 7,” Capt. Rocco Alvaro said in a blog post yesterday. “Area residents line up in the morning without adequate shelter and are forced to take their chances waiting on the edge of Route 7 for the next scheduled bus.”

Morrison and several of his crew members decided they would build a community bus stop, but only if they could get donations.

Reston’s Home Depot and The Barns at Wolf Trap then agreed to donate materials, which Fire Station 42 members used to build a covered stop.

Although the initial structure is complete, some finishing touches are still in the works.

“When finished, the project will bring some of the finer touches of the Wolftrap Firehouse into the soon-to-be-completed bus stop,” Alvaro said.

The captain said he hopes more collaborative projects are in the community’s future.

“What an innovative way to develop community partnerships while at the same time enhancing the safety and well-being of our community members,” he said.