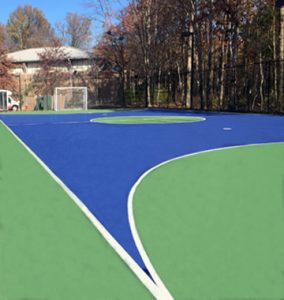 The community center at 12125 Pinecrest Road is scheduled to hold a ribbon-cutting ceremony to mark the opening of its new soccer area Tuesday at 4 p.m.

“We are very excited to celebrate the opening of our new outdoor soccer court,” said Richard Cabellos, director of the Southgate Community Center, in a statement. “This has been an outstanding example of county-community engagement and participation in turning what was once a little-used tennis court into a highly-popular and exciting activity facility for kids and teens in the area.”

As Jennae Duarte of the county’s Neighborhood and Community Services explains, it was the kids that made it happen.

Duarte said kids and teens in the area had been lobbying for more soccer facilities for some time when they came up with the idea of transforming an old, rarely used tennis court on the community center property into an outdoor soccer field. The teens spoke to members of the community center’s advisory council about the idea, and the council lobbied the county to help bring the idea into reality.

“The kids were really the champions of this project,” said Duarte. “And, we could see it was a real need for the community. They really love their soccer here.”

Southgate also hosts an intramural soccer tournament each year, so Duarte said the new court will come in very handy for the annual event.

Southgate Community Center was also the recipient of $3,500 worth of soccer equipment from professional team D.C. United as part of its “Every Save Makes a Difference” program earlier this year. D.C. United’s goalkeeper Bill Hamid scored seven saves during their July 1 match against Salt Lake, and each was worth $500 toward the organization of their choice.

Now, kids in Reston have a brand-new court to try out that new equipment.

“Soccer is a big part of the culture here at the Southgate Community Center,” Cabellos stated. “All of this equipment will be a massive boost to our community center soccer league and help with our annual ‘Take It to the Streets’ soccer tournament.”

In addition to Hunter Mill District Supervisor Catherine Hudgins and Duarte, many of the local kids who helped champion the idea of the new soccer field will be on hand to help cut the ribbon on Tuesday.