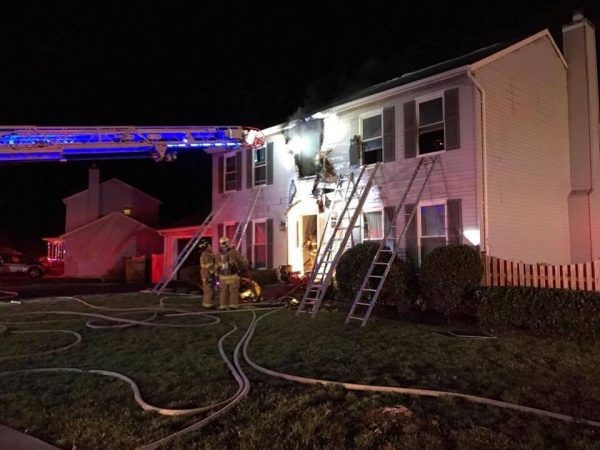 A house fire left two Herndon residents and their dogs without a home earlier this week.

The fire started at a two-story home on the 12200 block of Parkstream Terrace around 7:43 p.m. Monday, Fairfax County Fire and Rescue said in a release today.

Firefighters contained the fire to the building’s second floor bedroom. Nobody was injured in the blaze, authorities said.

From Fairfax County Fire and Rescue:

Units arrived on scene to find a two-story, single family home with fire showing from the front. Two adult occupants and two dogs had safely evacuated before the fire department arrived. Firefighters quickly extinguished the fire. The bulk of the fire was contained to a second floor bedroom with minor extension into the attic area.

The home had working smoke alarms. However, an occupant of the home smelled smoke and discovered the fire prior to the activation of the smoke alarms.

Two adults and two dogs have been displaced as a result of the fire. Red Cross assistance was offered and declined. There were no reported civilian or firefighter injuries.

Fire Investigators determined the fire originated in a second floor bedroom. The cause of the fire is currently under investigation. Damages are estimated at $93,750.00.