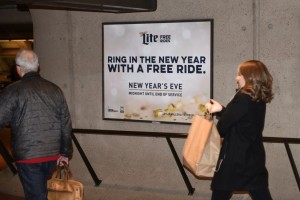 Reston residents may be able to get once again take a free Metro ride on New Year’s Eve.

The transit agency is in the final stages of another partnership with MillerCoors to provide free rides between midnight and 3 a.m. on all six Metro lines this year, as it did for last year’s holiday. The agenda item was up for approval during the Dec. 15 meeting of Metro’s Board of Directors.

According to a staff report, MillerCoors paid WMATA more than $160,000 last year to subsidize all Metrorail and Metrobus rides on New Year’s Eve between midnight and 3 a.m., as part of he company’s Free Rides promotion. The amount was based on expected ridership.

This year, if approved, MillerCoors will pay just over $81,000, as ridership on New Year’s Eve was only about half of what was expected last year. However, the amount is guaranteed regardless of actual ridership, the report states.

MillerCoors has offered its Free Rides program in more than 20 major cities across the U.S. for more than a decade.

“Our partnership with Metro is part of MillerCoors’ overall commitment to help prevent drunk driving by bringing alcohol responsibility programs to more markets,” a MillerCoors spokesperson said during the inaugural promotion in 2015.

In addition to Metro, local New Year’s Eve party-goers can also call for a free taxi ride of up to $30 thanks to the local nonprofit, the Washington Regional Alcohol Program.