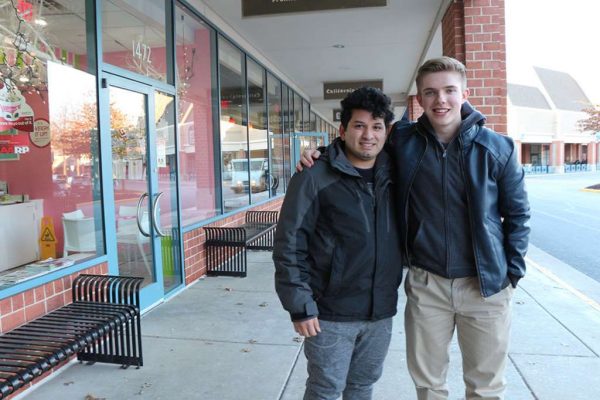 His name is Jonathan Chicas. But his friends call him “Primo.”

And when he was going through some tough times recently, his local “family” was there to help him out. He had fallen sick with pneumonia and was facing a seemingly insurmountable medical bill.

His worries were alleviated when the bill was covered in less than 24 hours, thanks to a GoFundMe page and a community that supports those in need.

“I was sure that I was going to need to leave school to pay this,” Jonathan said. “Wow, I was so happy.”

Jonathan, a junior at Herndon High School, came to the U.S. with his family from El Salvador. Living in Herndon, they sometimes have trouble making ends meet. To pay the bills, Jonathan sometimes has to help out by doing odd jobs.

Recently, he was working on a concrete job in unfriendly weather.

It wasn’t long after that he started to feel sick — very, very sick.

“I was sneezing and I was getting headaches,” he said. “The next day, it was getting worse.”

Jonathan tried to fight the illness without taking medicine or going to the doctor. Instead, he visited the school clinic.

“I didn’t want to go to the hospital, because I knew it was going to be very, very expensive,” he said, adding that he does not have health insurance.

After a few days, his health turned from bad to worse.

“I went to the clinic and I told the nurse that now I was feeling miserable,” he said. “I went to the bathroom and I was vomiting, and I saw some red spots, and I knew it was blood.”

An ambulance was summoned to transfer Jonathan to the emergency room. He spent a morning there, where he received a pneumonia diagnosis. He was given antibiotics and quickly felt better. After about a week of recovery, he was good as new.

That is, until the bill arrived.

Jonathan felt sick again, this time for another reason.

“We were supposed to have dinner, and I wasn’t hungry at all,” he said. “I had lost it, to be honest.”

Ryan had been used to hearing from “Primo” regularly. They spent a lot of time together after becoming friends in personal fitness class.

When he hadn’t seen his friend around or heard from him for several days, he texted to ask what was going on.

But when Jonathan brought the bill over to show Ryan, the true scope of the problem came to light.

“He looked really depressed, and that was something I’d never really seen before,” Ryan said. “I kept telling him on the way home, ‘I think everything’s going to be all right, it’s going to be OK.’ But I knew at that point he didn’t believe me, and I don’t know if I totally believed myself.”

Jonathan’s mother makes $380 a week at her job, and his dad makes some cash here and there through handyman work, but not much in the winter. In addition to helping to pay the bills, Jonathan sends money back to El Salvador to help his grandmother.

“I kind of know his financial situation, about having to pay other bills,” Ryan said. “The amount of work he has to put in just to get by is incredible.”

Ryan floated the idea of a GoFundMe campaign to raise money to pay the bill.

“I knew, just from the people that Jonathan is friends with and people he’s met, they all love him,” he said. “I knew they would come out and support him.”

Jonathan wasn’t as optimistic, but Ryan was able to convince him. The page launched Jan. 4.

And it took off, Ryan said.

“At first it was people we knew, good friends of Jonathan, and then it was people who had heard about him or just heard the story, and they all wanted to get involved,” he said. “That’s truly a testament to this community that we have here. I knew there were some really great people, but I didn’t realize how much support they could bring for someone they barely knew. I just thought that was awesome.”

From the GoFundMe page:

“Our friend Jonathan, known to many as ‘Primo’ needs our help. In early December Jonathan caught pneumonia and despite trying to soldier through it, he ended up in the Emergency Room. Primo doesn’t have insurance and he’s now facing a staggering medical bill. In addition to being a student a Herndon High School, Jonathan works multiple jobs to support himself and his family. He’s considering dropping out to take on yet another job to pay this bill. If we can all pitch in, even a little bit, we might be able to cover the expenses and keep Primo on the path to graduation. If you know Primo, you know just how wonderful a guy he is. He needs our help. Please consider donating today.”

The money is currently in a special account, being handled by Ryan’s mother, Kristina. It will soon be transferred to pay the bill in full, with some cash left over to help Jonathan’s other expenses.

Jonathan said he is hopeful that he can pursue a career in the U.S. Marine Corps once he is done with school. He is involved in the ROTC program at Herndon High and he has been talking with a recruiter about making his dream a reality.

“(I’d be) serving the country that has helped me,” he said. “I just want to protect my family and my friends, so they can have the rights that they have.”

Ryan said that selfless determination is further proof of the type of human being “Primo,” his “cousin,” is.

“He’s just a nice guy, really kind,” Ryan said. “He really is loved by this community.”