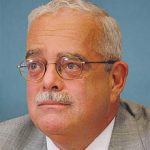 Reston’s voice in the House of Representatives, U.S. Rep. Gerry Connolly (D-Va.), has announced that he has joined the growing list of Democratic members of Congress who will not be attending the Inauguration of President Donald Trump on Friday.

“After long reflection I have decided that I cannot attend the inauguration of Donald J Trump on Friday. His behavior and harmful words during and after the campaign have left the country I love with open, bleeding wounds. Instead of binding those wounds, he has poured salt on them. Instead of unifying us, he has reveled in driving wedges between us. His disparagement of an entire religion; his racist rants about minorities; his resurrection of white supremacy; his ridicule of the disabled; his blatant misogyny and boasting of unwanted sexual advances; his intimidation of the press; his repugnant attack on civil rights hero John Lewis; and his disturbing defense of and advocacy for Vladimir Putin — a KGB thug — threaten our democratic institutions. How can I celebrate that? The sordid aspects of his behavior must not become the new normal for America or her presidents.”

Connolly joins more than 50 of his peers who have publicly announced they will not attend the ceremony.