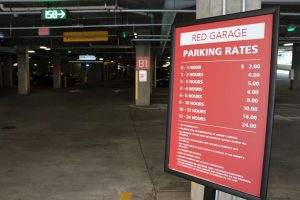 (Updated at 12:40 p.m. to correct title of Kathy Walsh. She is marketing director of the Fallston Group, not of Boston Properties.)

Printed below is the full text of the responses received from Kathy Walsh, marketing director of the Fallston Group and a spokesperson for Boston Properties.

Q: Has Boston Properties met/spoken with any of the merchants since paid parking began? Are there any plans in the near future to do so?
A: Yes. Boston Properties team members remain in routine, personal contact with merchants, particularly around the paid parking model and its roll-out. The ongoing communication occurs at differing levels within each organization, from business owners to management.

Q: Does BP have any response to the claims sales went down 10-50 percent in January?
A: Although Boston Properties generally doesn’t receive January revenue data until February or March of the same year, they have specifically reached out to retailers to more quickly analyze January 2016 to January 2017 revenue data. Upon close analysis, it is clear that some of the most vocal retailers who have publicly claimed year-over-year sales are down due to paid parking are actually experiencing sales increases for that time period. It is important to emphasize this is a 30-day snapshot and not a longer-term trend, and this reflects a small sampling of retailers. Boston Properties will continue to closely analyze all revenue activity.

Q: Has there been any discussion internally at BP about what this change has done to the business climate at RTC?
A: While Boston Properties fully expects to see some change upon the onset of paid parking, our data reflects far less impact than what is being reported publicly by certain merchants. For instance, when analyzing parking occupancy in garages Monday through Friday from 4:00 p.m. – 10:00 p.m., there were 68,000 visits in January, compared to 72,000 in November, which is naturally higher as the holiday shopping season kicks off. We believe this is a normal seasonal decrease. Interestingly, data shows that, on average, those visitors stayed longer in January – 4.59 hours – as compared to November (4.5) and December (4.25).

Q: A business owner at [Monday]’s meeting claimed she signed a new lease last year and BP’s plan to switch to paid parking was not disclosed. Was the intention to implement paid parking disclosed to all incoming/renewing businesses?
A: Without exception, there is language about paid parking built into every lease, so any renewing or new tenants should have been fully aware of the possibility.

Walsh also said paid parking has not been the explicit reason for any retailers leaving Reston Town Center since its implementation.

“Every tenant who has left either already planned to leave Reston Town Center and was in the process of negotiating their departure or closed their doors for other business reasons.”

Walsh said 13 retailers renewed leases in the Town Center in 2016. Already in 2017, she said, two have renewed and four new retail leases are in progress.

The spokesperson also stressed that Boston Properties has determined that many owners of Reston Town Center establishments have “a very high degree of concern” about what people representing their businesses are saying publicly:

“Through Boston Properties’ efforts to engage retailers, they have determined that many of the most vocal people allegedly representing Reston Town Center retailers are employees rather than owners of those establishments. Boston Properties has had numerous discussions with owners and senior managers who have indicated they do not share their employees’ views or approve of their behavior in response to paid parking. In fact, Boston Properties has received numerous calls from retailers who expressed a very high degree of concern about the public posture of a few. Candidly, they want no part of those who are attempting to dissuade customers from coming to Reston Town Center.”

In regard to the ParkRTC app, Walsh said the number of phone calls and emails regarding questions about the app have “dropped significantly,” though she says Boston Properties understands some people continue to experience frustration.

“Boston Properties is continuing to work to implement changes to make it even more user-friendly. Many people are successfully using the app, with 78% of daily parkers paying via the app. There have also been 75,000 downloads of the app to date, with an average of 1,000 new downloads per day.”

While a number of people have expressed fears about the security of the app, Walsh said those worries are unfounded:

“The ParkRTC app is supported by Passport, the largest provider of mobile payment software for parking in North America. Both Passport Inc. and Reston Town Center take the important responsibility to protect credit card information very seriously. Passport conducts regular audits of its information security systems to ensure there are no vulnerabilities — data security is core to their business. In fact, Passport employs a two factor authentication (2FA) process that requires first-time users to verify their identity by entering a text authorization sent to verify device ownership in addition to a pin number. Passport also holds compliance with PCI DSS Level 1 certification, the most stringent data security framework administered by the PCI Security Standards Council. Passport will never sell or distribute ParkRTC user information to third parties.”

Walsh said Boston Properties has implemented, or plans to implement, a number of system improvements in response to customer feedback, including:

Walsh said a task force is working to ensure the future of Reston Town Center is bright.

“Boston Properties has assembled a task force consisting of development, leasing, marketing and property management personnel representing residential, commercial and office properties who are meeting with national consultants to develop and implement a strategy designed to ensure Reston Town Center remains an upscale destination and draw for those looking to live, work, shop and play.”

Aaron Mervis, who manages Big Bowl restaurant and is one of the organizers of the merchants’ group opposing the current paid parking system, issued this statement to Reston Now in response:

“It is important that Boston Properties understands that the Tenants’ goal is to improve the situation in the Reston Town Center and protect their businesses, which will also benefit Boston Properties. Tenants have expressed a large list of concerns directly related to the paid parking, including decreased sales and a significant rise in customer complaints about both the complexity of the system and the cost.”

“Boston Properties’ desire to wait while continuing to analyze the effects on business in the hope the uproar will recede will only make it more difficult to convince disenchanted customers who have changed their eating and buying habits to return. They have many options.”

“While owners and managers of establishments are upset, we also encourage management from Boston Properties to speak directly with the employees of the various stores in the town center for their thoughts on the impact of paid parking. Many of these employees receive tips or commission. As business has slumped, hours have been reduced and they are earning less in commissions and tips.”

END_OF_DOCUMENT_TOKEN_TO_BE_REPLACED

More Stories
Del. Ken Plum: How a Bill Does Not Become a Law in VirginiaWind Advisory in Effect for Fairfax County Until 6 P.M.