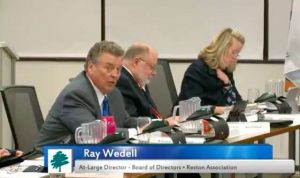 “This has been a scuttlebutt for many years,” Wedell said as he delivered his presentation Thursday night at the Reston Association Board of Directors meeting. “We have a proposal on the table — it can be altered, can be changed, can be ignored if you want to ignore it. But something has to be out to start the discussion.” 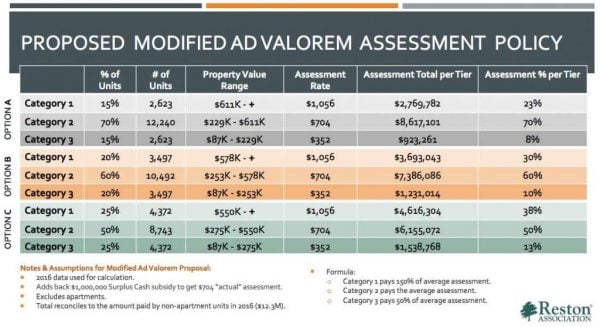 Wedell said under the current system, 3.1 percent of units do not pay the flat rate, as subsidized properties are already offered a 50 percent assessment reduction. The director said those units would not be part of any policy change and would continue to pay their current rate.

Any policy change would be revenue-neutral, Wedell said, meaning the same total amount would be collected. He also added that altering the structure would “adhere to Reston’s time-honored principle to be fair and equitable to all members.”

Wedell has taken the idea upon himself as a personal initiative. It is not a current priority of the board, Vice President Michael Sanio clarified for meeting attendees.

“We appreciate our members pursuing various issues,” Sanio said. “This particular one is something that Ray has had a real interest in.”

The data provided Thursday by Wedell were only in the form of a presentation to the board; no action was taken.

Changing the assessment formula would require an amendment to the Reston Deed. That would require approval from the Board of Directors, at least 30 percent voter turnout on a referendum, and at least two-thirds approval on that vote.

“These are high hurdles, but it’s not something we should run away from,” Wedell said. “I think it’s time for us to put this on the table.”