Reston Community Center recently bid a fond farewell to a woman who has been documenting its history for more than three decades.

Staff photographer Linda Rutledge, who had been with RCC since 1981, retired from the position last week. Leila Gordon, RCC’s executive director, said the impact Rutledge has had on the organization over the years has been practically immeasurable.

“We have a massive and fabulous photo archive from RCC’s very earliest years,” Gordon said. “We’ve been very close, and her history with RCC is very much intertwined with the history of this agency, this institution itself.” 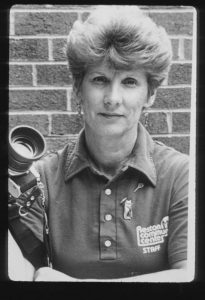 Gordon said Rutledge has not only a keen eye for photography, but a “tremendous degree of institutional memory” that made her an extremely valuable employee.

“We will be very hard-pressed to replace, and we’ll just have to grow again, Linda’s tremendous knowledge of Reston,” Gordon said. “You didn’t have to give her instructions or a shoot list, or say ‘Be sure that you get so-and-so.’ She just knew, she just absolutely knew where the people she needed to shoot were.”

Rutledge’s ability to capture a moment in a photo, showing the emotion of a situation, was another quality Gordon praised.

“[She could] focus on a spontaneous humanity of a setting, not taking pictures at an event that are just people standing and smiling for the camera,” the executive director said. “Her photographs are beautiful because they show people doing things and engrossed in those things that were part of their RCC experience.”

Gordon said she fully expects that Rutledge will not be able to completely separate herself and her camera from Reston Community Center.

“She loves the Multicultural Festival, and she loves our [Dr. Martin Luther] King celebration events, so there are some things like that I imagine she’ll still want to contribute photographs to,” Gordon said. “There are some things that Linda says she just wouldn’t feel she is alive if she missed.”

More Stories
Friday Morning NotesWedell: Altering Assessment Policy ‘Not Something We Should Run Away From’