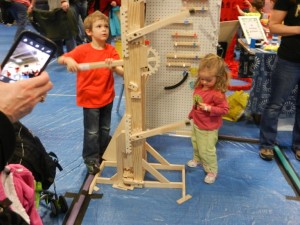 Engineers, artists, scientists and more will bring their latest creations to Reston later this month.

Featured “makers” at this year’s event will include HackRVA with their giant spirograph, miniature racing quadcopters and more; and DorkPod with their experimental personal-mobility device, among others. More than 100 makers in total are expected to share their knowledge through hands-on projects, demonstrations, workshops and more. Robotics, drones and 3D printers are just some of the many types of technology expected to be on display.

From a press release:

“Maker Faire is a gathering of fascinating, curious people who enjoy learning and who love sharing what they can do. From engineers to artists to scientists to crafters, the Maker Faire provides an opportunity for ‘makers’ to show hobbies, experiments and projects. Tagged ‘The Greatest Show (& Tell) on Earth,’ this glimpse of the future and inspiration is a family-friendly showcase of invention, creativity and resourcefulness.”

The event was known as the Mini Maker Faire in previous years. The “mini” has been dropped from the name this year as the event’s scale and scope have expanded, according to the press release.

Advance tickets are $2 for children ages 2-18 and $13 for adults ($10 for seniors) and can be purchased online. Ticket prices increase by $2 at the door. A family ticket package is also available.