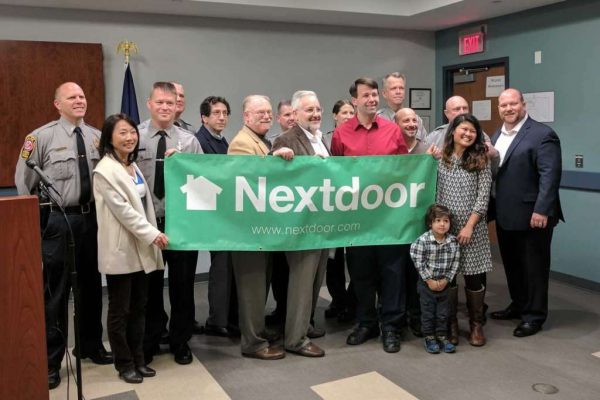 The Fairfax County Police Department celebrated Thursday the one-year anniversary of its partnership with neighborhood networking site Nextdoor, and several local communities were honored for their participation as well.

At a press conference, FCPD said its involvement on Nextdoor has helped it more effectively communicate and engage with residents. On Nextdoor, community members can form social networks that are specific to their neighborhood, and only visible to registered members of those neighborhoods. According to information provided by Nextdoor, more than 100,000 residents in more than 760 county neighborhoods are using the site to connect with each other and police — numbers that have doubled in the past year.

“Our county is stronger and safer when we have informed and involved residents,” said Edwin C. Roessler, FCPD chief. “Nextdoor has been a great way for residents to become more engaged within their own communities and with the police department. We are excited that so many neighborhoods are participating and encourage more residents to join.”

“The Fairfax County Police Department is one of the top Nextdoor counties in the country,” he said. “Many residents feel a stronger connection to their neighbors and the police department, and we are honored that Nextdoor has played a role in that.”

Several Fairfax County communities were honored for their engagement with the site, including three in Reston:

Eighty Reston communities have established networks on Nextdoor, according to its website.