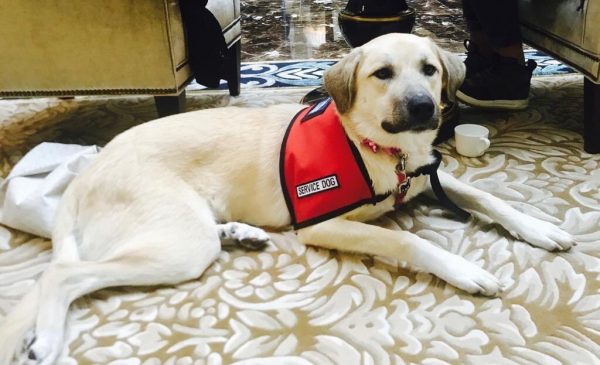 Police in Herndon, along with the help of residents, reunited a service dog with her owner Wednesday.

According to Jane Ross, Herndon PD information specialist, service dog Bella went missing after her owner was involved in a minor car accident at about 10:40 a.m. Tuesday in the area of Elden and Grant streets.

“When [her owner] opened the door, Bella unfortunately got out of the car and ran,” Ross said.

Herndon Police used their social media pages to spread information about Bella and engage the public in helping track the 8-month-old Anatolian Shepherd mix down.

Bella was spotted by a citizen at about 11 a.m. Wednesday near the police station, Ross said. Police officers along with members of the public attempted to reach the dog, who was eventually corralled at about 12:10 p.m. by an employee at Flagship Car Wash (632 Grant St.) and reunited with her owner, safe and sound.

#Bella, the missing service dog, has been located. She is safe and well, and has been reunited with her owner. #Herndon #Reston @fox5dc