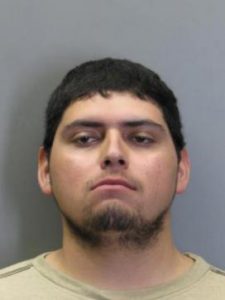 A Herndon woman was surprised to find two men in her garage on a recent afternoon, the Fairfax County Police Department reports.

According to a police report, the woman found the burglary suspects in her garage in the 1600 block of Winterwood Place at about 5:10 p.m. Thursday. The men attempted to flee, but the woman was able to detain one of them without injury. The man, 19-year-old Richard Reyes of Herndon, was arrested and charged with two counts of burglary, two counts of grand larceny, possession of marijuana and being drunk in public.

The other suspect was also identified, police say. The investigation is ongoing, but police say it has been determined that the duo also burglarized another home.

FCPD also reports a robbery that took place Thursday between 10:30 and 11 p.m. in the 1600 block of Autumnwood Drive in Reston. Property was reported stolen from an open garage and a car parked outside.

Other incident reports this week from the Reston District Station of FCPD include:

In Loudoun County, police say a Reston man fled from a traffic stop just before 2:30 a.m. Tuesday on Charles Town Pike (Route 9). The driver, identified as 37-year-old Joel E. Hyduke, allegedly took off down Purcellville Road before exiting the vehicle and fleeing on foot. Hyduke was apprehended and charged with DWI and speeding before being taken to the Loudoun County Adult Detention Center.

Also in Loudoun County, a Herndon man was charged with driving under the influence after a reported crash at about 3:50 p.m. Saturday in the area of North Sterling Boulevard and East Church Road in Sterling. Brayan L. Palma-Camacho, 24, allegedly drove off after the collision, and deputies found his vehicle a short time later near Relocation Drive, about three miles away.

Palma-Camacho was taken to the Loudoun County Adult Detention Center, from which he was released on a personal recognizance bond.

In the Town of Vienna, a Reston man with warrants out for his arrest from the Fairfax County Police Department was tracked down by a Vienna Police Department officer in the 200 block of Patrick Street SW at 9:41 a.m. Monday, April 3. The 20-year-old from Colts Neck Court, who was not identified by police, was charged with assault, destruction of property and making threatening telephone calls, and he was served with an emergency protective order.

In Fauquier County, a pair from Herndon were charged after police say one was spotted riding an all-terrain vehicle on a roadway. Erik Gjormand, 19, was charged with DUI, underage possession of alcohol and operating an ATV on a highway at about 6 p.m. Saturday in the 2500 block of Dumfries Road. Gabriel Coltrane Walker, 18, was also charged with being drunk in public.