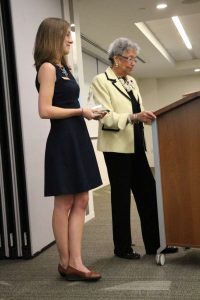 Kelsey Richard, a recreation specialist, was named Reston Association’s 2016 Employee of the Year during the annual Members’ Meeting on Tuesday.

“Kelsey was selected for her incredible service to RA,” said Ellen Graves, outgoing president of the Reston Association Board of Directors, in presenting the award. “She’s always friendly, she’s always upbeat and positive and consistently provides RA members and her RA partners with outstanding customer service, and [she] models teamwork and a can-do attitude every day.”

Graves said Richard went “above and beyond” in 2016 to help her department and others, including Member Services.

“[Kelsey] personifies the Reston Association model employee,” Graves said. “She regularly jumps in and helps wherever needed, regardless of whether it is her job or not.”

Graves said when help was needed on the aquatics team, Richard was quick to fill in, and she did the same when a bus driver was needed for RA’s camp program. Richard also helped train numerous co-workers to use RA’s new WebTrac system, Graves said.

“As humble as she is, she deserves significant recognition for all she has brought to the organization this year,” Graves said.

Richard first received recognition for the award in December, but Graves said the annual Members’ Meeting was an opportunity to once again thank her for her efforts.

RA’s top volunteers of the year, who had in the past also been recognized at the Members’ Meeting, will be honored this year with their own ceremony during National Volunteer Week. That event will take place Thursday, April 27, from 6:30-9 p.m. at The Lake House.