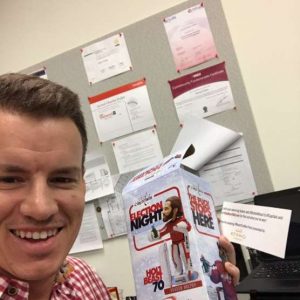 The Washington Capitals have big expectations this playoff season, which starts tonight at the Verizon Center with Game 1 of the team’s opening-round series.

Some local Capitals fans had the opportunity for even more excitement Thursday morning, however, as Reston was one of eight locations in the DC Metro area the Capitals chose for a giveaway contest.

At each location, five bobblehead figures of Capitals goaltender Braden Holtby were hidden. Hints were provided on the Capitals’ social media accounts, and the fans who found the hidden figures were rewarded with prizes including signed memorabilia and game tickets.

The five bobbleheads in Reston were hidden at Reston Town Center. The first to be found — which was the first of all 40 to be tracked down — was located in the Town Center pavilion by Jared Puleo just after 9 a.m.

“I walked in and showed everybody in my office,” said Puleo, a Purcellville resident who works at software company Daon. “I was stoked.”

Puleo, who said he will be attending tonight’s game against the Toronto Maple Leafs, won a signed puck from the team.

Some clues for Reston! Little under an hour left for our #RockTheRed Hunt! pic.twitter.com/FEfuMxTSY2

Other hides within the Town Center, according to hints posted by the Capitals, included ones at Fountain Square and within the “A Bird in the Hand” public art installation at Greater Reston Arts Center. That’s where Sheena Dunn of Alexandria, who works at an engineering company off Sunrise Valley Drive, was searching late Thursday morning — but the prize had already been claimed.

“I went to my boss and said it was in Reston Town Center, and he said ‘OK, go!'” said Dunn, a Caps season-ticket holder who said she would also be in attendance for tonight’s game. “It looks like they’re all gone, but it was fun.”

Both Puleo and Dunn said they have tempered optimism for the team during the playoffs. The Capitals, who have never won a Stanley Cup, won the Presidents’ Trophy as the National Hockey League’s best regular-season team this year.

“I’m nervous, as Caps fans always are this time of year,” Puleo said. “But I’m excited and I’m hoping for the best.”