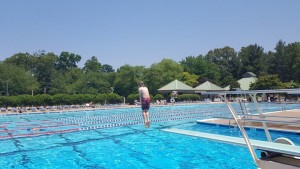 Diana Turecek of Windleaf Court calls changes in hours in the 2017 Reston Association swimming pool schedule a “slap in the face to Reston residents who continue to face substantial increases in annual Association dues.”

In a letter to the editor submitted to Reston Now, Turecek says the changes — which include no weekday swimming prior to Memorial Day weekend and only two pools open the week before Labor Day — will result in frustration for Reston residents who just want to go swimming.

“This year fewer pools will be open, and those that are open will be open fewer hours. If you like swimming at the end of the season, have kids who like to swim on the weekdays, or are a lap swimmer, the pools are going to be much more crowded.”

“During the 2017 budget development process, the Board directed staff to identify significant cost savings in the budget to accommodate other strategic goals. Based on facility usage data collected over the past three years that shows a decline in pool attendance as well as feedback from the Parks & Recreation Advisory Committee, the Board of Directors approved pool schedule options by which the proposed aquatics budget could be reduced while still serving the interests of the membership as a whole.”

Another reader who contacted Reston Now about the changes says the new schedule fails “to take into consideration that most people want these pools open when the weather is warm enough to swim through Labor Day.”

North Shore and Ridge Heights will be the only two pools open the week preceding Labor Day, from 4-7 p.m. each evening. All other pools will see their seasons end by Aug. 27. In 2016, Glade and Lake Newport pools also remained open through the first weekend in September.

Leone said pool staff is made up mainly of high school and college students. Fairfax County Public Schools changed its school schedule for 2017-18, beginning classes the last week of August (Monday, Aug. 28) instead of after Labor Day as in the past. Leone said a school schedule that ends June 23 and begins again Aug. 28 results in only nine full weeks of summer for pool scheduling.

Leone said the pool “season” schedule was tweaked this year to allow two more pools to stay open prior to school returning to session. In addition, he said, RA “will reopen as many pools as possible for the three-day Labor Day weekend, prioritizing those facilities which have the most capacity for swimmers and recreational users of all types.”

Turecek also expressed concern about Lake Newport pool being closed until 1 p.m. most weekends in June and July for Reston Swim Team Association meets. Other pools will be affected three weekends during the summer for meets.

“I also suspect — as in past years — there will be other non-announced pool closures to accommodate local day cares, summer camps or the dreaded ‘hygiene incidents,'” Turecek wrote.

Leone said staff has looked strategically at pools that can “generate additional revenue from rentals and activities during ‘closed’ hours.”

North Shore and Ridge Heights pools will open for the season Saturday, May 13, from 10 a.m. to 7 p.m.