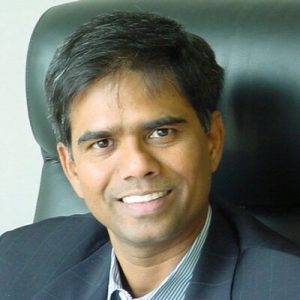 After hearing brief comments by its two candidates for treasurer — Sridhar Ganesan and Mike Werner — members of the Reston Association Board chose Ganesan as their new treasurer Thursday night.

Ganesan immediately took his new seat at the directors’ table after the ballots were counted.

Ganesan is president of the Reston Citizens Association and also heads the group that applied to conduct the audit of the Tetra/Lake House purchase and renovations.

“I’m here for the same reason many of you are; I want to be a volunteer,” Ganesan said when addressing the board just before the ballots were cast. “And I feel this is the right time for me to step up and serve.”

Ganesan said he feels community involvement is crucial now, perhaps more so than ever.

“I think RA is at a critical juncture at this stage, as it is attempting to inspire renewed trust and confidence with the community.”

He added that through his experience as a CFO, he is familiar with taking recommendations from experts and moving them past the “talking” phase and into the implementation phase, which he thinks will be a valuable skill he can bring to the table.

“I also bring a lot of corporate finance experience, which is something I think could be of great help when it comes to balancing capital investment projects,” he added, explaining that the “balancing” part means not “analyzing something to death,” while also being sure to follow correct procedures and being as transparent as possible, which is crucial when dealing with public money.

“I think I can help build bridges with the public community, as the CFO of a public corporation,” he concluded.

Mike Werner, who ran against Ganesan for the treasurer’s seat, continues to serve on the Reston Association Finance Committee, which he has been a member of since 2014.

END_OF_DOCUMENT_TOKEN_TO_BE_REPLACED

More Stories
Herndon Festival to Bring Thousands to Town Next WeekWhat’s Going On Around Reston This Weekend?