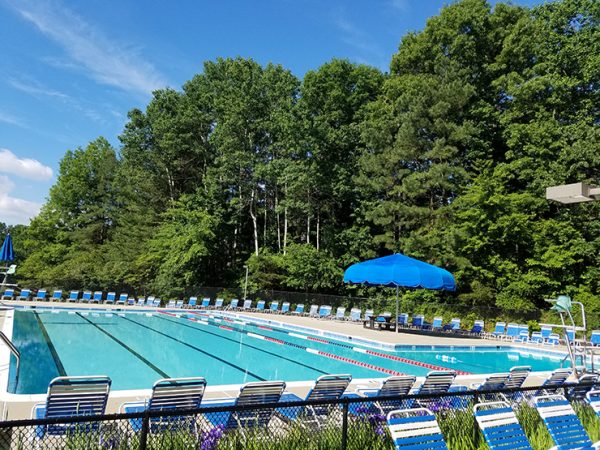 Lake Audubon Pool was closed last weekend, and it remains unknown when it will again be available for fun in the sun.

A broken drainage pipe discovered last week resulted in the facility being shut down until further notice. Laura Kowalski, Reston Association’s deputy director for recreation, says a subcontractor of Dominion Energy caused the damage while digging a trench between junction boxes.

“Dominion is working toward getting that piece remedied, so that we can open the facility,” Kowalski said, adding that recent rain will likely delay the effort.

The Lake Audubon Swim Team has been relocated to another pool, Kowalski said. According to its website, all practices will be at Newbridge Pool “until further notice.” Kowalski said the facility may change again in the future.

No re-open date for Lake Audubon Pool is yet available, Kowalski said, but there has been “regular contact” with the power company to try to push the work forward.

In addition, last weekend the pools at Golf Course Island, North Hills and Uplands went down due to maintenance issues. Kowalski said those problems have been attended to and the pools will be reopened next weekend for regularly scheduled hours.

“With any organization that has outdoor facilities, there are issues that arise as a result of not being in operation over the winter months,” Kowalski said. “A lot of those things are detected early and they are taken care of before the pool is even open, that’s wave one. Wave two is once the facility has people and staff, then other issues arise, and that’s pretty normal for each year.”

Kowalski said there are 33 bodies of water at Reston Association facilities — pools, spas and spray features. Backup motors for each type of facility are kept in stock and replenished as necessary.

“There are so many facilities in Reston for people to go to,” Kowalski said. “There really is something else very close by [if there is a pool closure].”