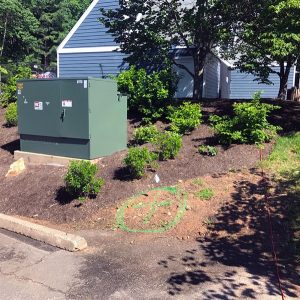 Pool season has just arrived, but one Reston Association facility is already splashed out — and RA says Dominion Power may be to blame.

The Lake Audubon Pool is closed indefinitely and needs “significant repairs” because of a broken drainage pipe, Reston Association has announced. According to RA:

The problem was first discovered when standing water was found in the bathhouse. A blockage in the drainage pipe was later cleared by Roto-Rooter Plumbing and Drain Service, but a crack in the pipe was found Thursday morning that will require significant repairs to the pipe and possibly the power line that runs near the drainage pipe.

Reston Association has contacted Dominion Power about the electrical line and is investigating whether recent work near the site by the utility company may have contributed to the pipe being damaged.

The pipe will need to be dug up and the electrical line removed before the new pipe can be installed. Roto-Rooter’s equipment is currently stuck on the other side of the electrical line. RA is waiting on a proposal from the plumbing company for the digging up and repairing of the pipe. The association is also exploring how the pipe was damaged and whether it can seek reimbursement for repair costs.

Reston Association says the pool will not re-open until the pipe has been repaired and properly tested.

Lake Audubon Pool was scheduled to be open weekends from noon to 7 p.m. each day, with weekday hours beginning June 24.