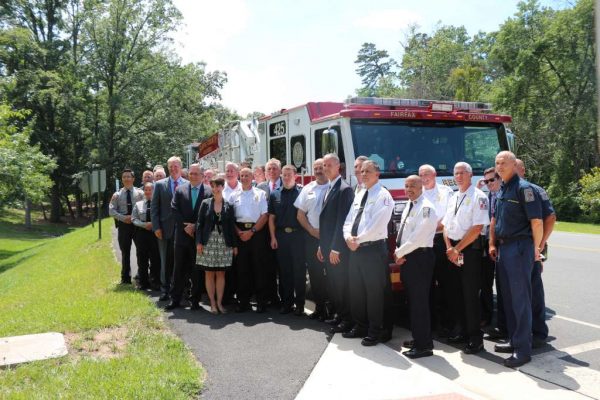 Phones get jammed during emergency situations.

It’s scary and frustrating for people trying to get in touch with loved ones — but for first responders trying to communicate with each other, it’s downright dangerous.

Tuesday, Virginia became the first state to try to amend that situation by joining the FirstNet communications network. Being developed by AT&T, it is a secured broadband network that provides fast and reliable interoperability for first responders.

“You cannot ask men and women to put on that uniform, to put their lives on the line, and not give them the tools they need to keep themselves safe,” said Gov. Terry McAuliffe during a ceremony Tuesday at FirstNet headquarters on Sunrise Valley Drive in Reston. “Today, we’re giving all those first responders the tools they need to be safe.”

McAuliffe was joined at the ceremony by fire and police chiefs from across Fairfax County, as well as by representatives of FirstNet and AT&T. T.J. Kennedy, president of FirstNet, said the network’s capacity will be built out over the next few months to allow non-AT&T users to join FirstNet as well. 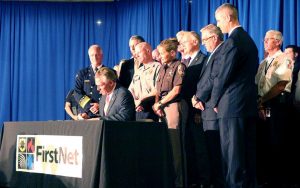 Richard Bowers, chief of Fairfax County Fire and Rescue, said he is proud that Virginia is the first state to be “first in, all in, to opt in” to the network.

“In the past, first responders were not able to communicate over the commercial wireless networks during significant incidents as the networks became congested and overwhelmed,” Bowers said. “As a responder to 9/11, along with many of my other colleagues that are here today… we had that very problem.”

First responders in the FirstNet network will have special SIM cards in their cellphones that will allow them to stay connected on their own dedicated system. Bowers said the network represents one of the most important transformational changes in public safety communications in decades.

“FirstNet will enhance services and save lives of our citizens and first responders,” he said. “What a key point in all of today’s information that’s being shared.”

McAuliffe, who is chair of the National Governors Association, said he is hopeful many other states will soon join the network as well.

“I do hope that my fellow governors take heed,” he said. “Leaving here today, if something were to happen, I now in my conscience know that we have done everything we possibly can to keep our first responders safe.”