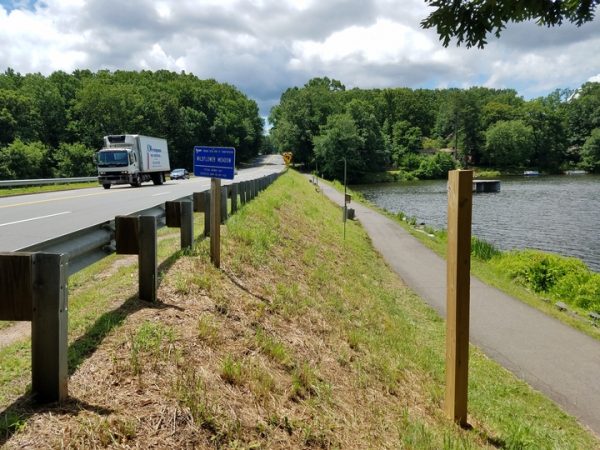 A state grant will foot half of the $14,590 bill for a recent hazard analysis of Lake Anne Dam.

A $7,295 grant from the Virginia Resources Authority will be put toward the evaluation, which was completed by consulting engineers GKY & Associates. Reston Association helped bring this grant to fruition.

RA says that prior to seeking the grant money, it had three potential construction solutions to bring the dam into compliance with state regulations, which would have cost between $2 million and $4 million. But according to RA:

Additional and more recent guidance provided by the state allows for evaluating certain aspects of the dam, including the spillway capacity and downstream impacts. RA opted to pursue an evaluation under this new guidance, which could result in a solution without excessive costs associated with extensive renovations to the dam.

The grant is part of a decision by Gov. Terry McAuliffe to provide $1.15 million for dam safety and floor management statewide. In a press release, McAuliffe cited the importance of the grant money and how “dam failures can be tragic for families and economically devastating for communities.”

Butler explained that over the past few years, as the state changed dam safety regulations, Lake Anne’s dam was re-classified as a high hazard dam.

“More than half of the dams receiving funding are classified as high hazard, meaning they pose the greatest risk to life and property upon failure and are a priority for the Commonwealth,” said Clyde E. Cristman, director of the Virginia Department of Conservation and Recreation, in the state press release.

Lake Anne was one of the dams to receive their grant as part of a 50/50 matching program. The other half of the evaluation’s cost will come from RA’s capital budget.