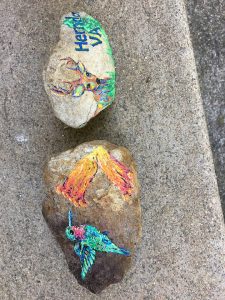 Walking down a path in the area and spot a small, hand-painted rock?

Don’t ignore it, because it was probably placed there for a good reason — for you to find it.

Herndon Rocks-Painted Rock Share! is a new Facebook group meant for Herndon-area residents to craftily paint rocks and leave them for others to find, share and trade. Since starting last month, it has grown to more than 200 members who are engaged in the family activity, which is growing in popularity across the country.

In Herndon, even the mayor is in on it. On Sunday, Lisa Merkel posted in the group, “OMG. I love this!!! How can I help promote it?”

The details of the painted rocks range from simple designs to elaborate small paintings, such as those pictured above, which were painted by the niece of the group founder, who goes by the name “Monet Flower” on the site.

On the Facebook page, Flower describes the group as “meant for people to paint rocks and then hide them around town, in public places or on the edge of property.” Participants are requested to put a note on the back of their rocks directing those who find them to take a picture and post it on the Facebook page before re-hiding the rock. 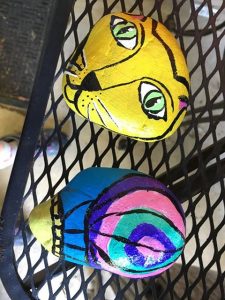 Group member Melory Mika is hoping that the group will grow and develop throughout the community.

“Our goal is that we want to give families a real-life treasure hunt and bonding time,” Mika said.

She said that given the relatively small number of people currently in the group, and the fact that everyone can’t be painting rocks all at once, it might be a little hard at first to find these painted objects.

“Since we are a new group, we are working hard in creating our hidden treasures at the moment,” Mika said. “Once we have grown and more people become involved, finding these will become easier.”

While the group may be new, the craze isn’t. Participation in rock-painting groups has exploded across the country in recent months. Reston Now editor Dave Emke even stumbled upon a painted rock on the W&OD Trail near Town Center Parkway a few months ago.

Someone left this piece of good advice on a W&OD signpost today. #RestonVA #WODTrail

Flower said she became hooked on the pastime when she discovered it through her grandchildren while visiting them in Southern California.

“For me it’s about a nice way for the community to get outside, participate in a craft activity, and share in fun,” she said. “It’s an inexpensive way to get outside in nature and connect with other Herndonites.”

No matter the age, Mika said, everyone and anyone is welcome to join, paint, discover and trade with Herndon Rocks.

“It’s hard to find 100 percent family-friendly things for all ages, but rock finding and painting is great for everyone,” she said.