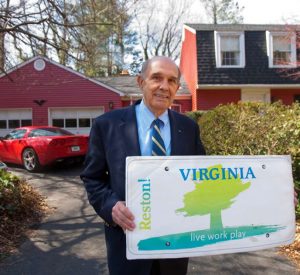 Dreams of the issuance of a special Reston license plate have fallen flat, and now those who applied will be getting their money back.

In 2006, Reston’s Dan McGuire began a campaign along with the Reston Citizens Association to garner enough support to get the Virginia Department of Motor Vehicles to issue a Reston-themed license plate. Special license plates are eligible to be issued for any group that receives at least 450 prepaid $10 applications, as well as authorization from the General Assembly.

The design for Reston’s special plate, which featured the “Live, Work, Play” motto, was by Doug Fuller. Though McGuire and the RCA campaigned for the plates for several years, the effort fell short. McGuire died in 2013.

Tuesday, the Reston Citizens Association announced it will refund all residents who signed up. RCA says it will be sending notifications to all applicants, letting them know they have a refund coming. Any funds that are unable to be returned by Oct. 1 will be donated to a local charity.

Moira Callaghan, vice president of RCA, said 83 applications were prepaid. She said any future effort to create a Reston specialty plate would have to be “an entirely new campaign.”

“The best course of action [right now] is to refund these applicants and possibly start over,” she said.