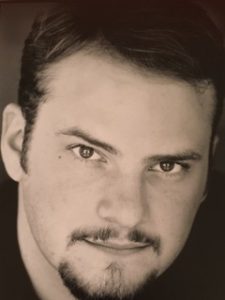 Actor Evan Helmuth, who lived in Reston until the age of 10, died July 18 in Los Angeles of complications from a stroke.

Helmuth, who attended Lake Anne Elementary School before his family moved to the Midwest, pursued a film career after graduating from Interlochen (Mich.) Arts Academy and from the University of Southern California’s School of Dramatic Arts. His credits included appearances in numerous popular films and television series.

The following information was provided by Helmuth’s family:

Evan Hershey Helmuth passed away in Los Angeles, California on July 18, 2017 of complications from a stroke. Born in 1977, Evan lived in Reston, Virginia until age 10, when he moved with his family to Ames, Iowa. For many summers, he attended the Interlochen Arts Camp in northern Michigan, followed by three years of high school at the year-round Interlochen Arts Academy. He graduated from the Academy in 1995 as a theater major, receiving the school’s highest award for an individual arts graduate. He further pursued his dramatic studies at the University of Southern California School of Dramatic Arts, where he received numerous awards and graduated in 1999 with the prestigious Jack Nicholson Award for outstanding actor. He lived in Los Angeles since that time.

Evan is remembered as a warm, kind, generous, and talented person by family and friends. He is survived by his sister, Erika Fairchild Helmuth Saunders of Hershey, PA; his stepmother, Paula Forrest of Ames, IA; and his beloved dog Sasha. He was preceded in death by his father John William Helmuth and his mother Kerry O’Brien Helmuth. Memorial contributions can be sent in Evan’s name to the University of Southern California School of Dramatic Arts and the Interlochen Center for the Arts, Theatre Division.

More Stories
What’s Going On Around Reston This Weekend?In The Design Studio: Seven Signs Your Kitchen Needs a Makeover