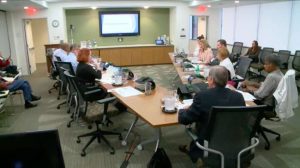 During a work session Monday (video) with the Reston Association Board of Directors, representatives of RA’s Capital Projects department broke down expenditures scheduled for 2018 and 2019.

Just over $2.8 million is budgeted for projects in the coming year. The highest-ticket item is dredging of Lake Thoreau (about $500,000), while other top costs include work on asphalt trails (over $186,000) and lighting for the North Hills tennis courts ($156,000).

The Board approves its Capital Projects and Operating budgets every two years.

Garrett Skinner, capital projects director, said the 10-year study of the Repair & Replacement Reserve Fund is being used in an effort to ensure that assessments don’t spike in years that larger capital projects are planned.

“We know we can still execute the work in that year without necessarily asking residents to pay significantly higher assessments just to execute what we know we need to get done,” Skinner said. “The intent was to make sure there wasn’t a significant impact on the residents to the assessment value if you can kind of make it … a consistent steady amount in terms of the capital contribution to the assessment, so when we get to those significant years, the blow isn’t right at once or a surprise to anyone.”

About $6.3 million in reserve fund balance is projected to be carried over into 2018, Skinner said, with about $1.6 million being unencumbered. To get to those numbers, the Board is being asked to fund the reserve in the amount of $2.9 million, which was already approved by the Fiscal Committee.

The Board is also being asked to consider a number of additional capital projects that have been suggested by members. Each was listed for directors along with an estimated cost and what that impact it would have on the assessment.

Next Monday, the Board will have another work session on the 2018 and 2019 Operating Budget.