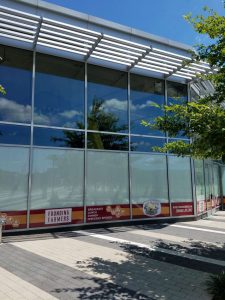 If you’ve been waiting patiently for Founding Farmers to open at Reston Station, be prepared to wait a little longer still.

Founding Farmers marketing director Meaghan O’Shea told Reston Now on Wednesday that the restaurant, which was first expected to open last year, is now looking at an opening date early next year.

“We are going to be opening in February of 2018,” O’Shea said. “We’re opening a restaurant in King of Prussia, Pennsylvania and it came down that one of them would have to move dates, and that’s just the way the dice fell.”

It was first announced in October 2015 that Founding Farmers would open its Reston location in late 2016. A year later, that date was pushed to the summer of 2017. Signage currently on the building indicates that it is slated to open in “late 2017.”

O’Shea said the new projected opening date is “not expected to move again or change in any way, shape or form.”

The Reston location will be Founding Farmers’ fifth. Others are in DC, Tysons Corner and Potomac, along with the coming restaurant in King of Prussia.

O’Shea said the Reston location of the farm-to-table restaurant will feature design elements celebrating Thomas Jefferson. It will also have a private dining room, which she said the other restaurants do not have.

“We’ve gotten so many requests for it in Tysons,” she said. “It’s clearly something our guests are asking for and want in some degree.”

The restaurant will offer full sit-down menus for three meals a day, O’Shea said, along with a weekend brunch. She also said there will be a quick-service, grab-and-go program called “First Bake” on weekday mornings to cater to commuters rushing to the Metro.

“We’ve been wanting to get open, obviously, for quite some time now,” O’Shea said. “We’re very anxious and really excited … but we want to make sure it’s a successful opening and we put our best possible foot forward in every aspect.”