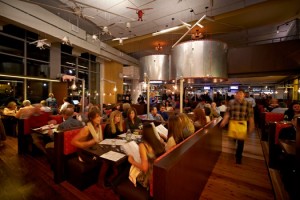 Reston will be getting a local outpost of Founding Farmers, the local chainlet of farm-to-table restaurants.

Comstock Partners confirms that the Farmers Restaurant Group has signed a lease to take over almost all of the current retail space at Reston Station.

The 10,000-square-foot restaurant is in the design stage, says Comstock spokeswoman Maggie Parker.

“We are delighted to have them out here,” said Parker. “Founding Farmers is a terrific, successful restaurant. It’s a great fit for Reston. ”

The retail space was completed prior to the opening of Silver Line in summer 2014. It has not had a permanent tenant, but has been used for special events in the months since. Comstock late last year announced a new concept — The Stock Market @ Reston Station — that would bring retail and food booths to the space. The deal fell apart in July, however.

The restaurant space will eventually be the first level of a future hotel at Reston Station. Reston Station is Comstock’s mixed-use project that sits atop the 3,300-space underground parking garage adjacent to the Wiehle-Reston East Silver Line Metro station.

Founding Farmers, which has locations in the District, Rockville and Tysons Corner, said to expect “something different in Reston, including a rooftop dining scene.”

“Reston is a wonderful, growing community and we’re excited to be joining the neighborhood, ” Dan Simons of Farmers Restaurant Group said in a statement. “As we expand, we’re passionately committed to evolving with each new location. Between the location of Reston Station and the chance to work with Comstock, this was an opportunity that we couldn’t pass up.”

Founding Farmers is expected to open in Reston in late 2016, after the company opens Farmers & Distillers, a 12,000-square-foot restaurant with in-house distillery , planned for 600 Massachusetts Ave. NW in the District, Parker said.

Comstock is also slated to start work on Reston Station’s first office building soon, said Parker. The 16-story, 365,000-square-foot building, designed by architect Helmut Jahn, will have, among other amenities, a rooftop helipad, and plaza-level retail.

The BLVD at Reston Station, the 528-unit luxury residential building by Comstock, will open a pre-leasing center soon in a small portion of the retail space on the plaza, said Parker. The building expects to have its first residents early in 2016.