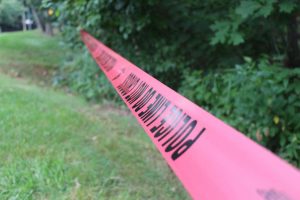 Two people from Ashburn were arrested in Herndon last week after a robbery in the town.

According to the Herndon Police Department, the incident took place in the 500 block of Florida Avenue on Aug. 7. The victim, who was unharmed, had his wallet, ID and about $40 in cash stolen by two suspects.

Elsewhere, a 55-year-old Herndon man was charged with driving under the influence after an incident in Sterling last week. According to the Loudoun County Sheriff’s Office, 55-year-old Nazlie R. Dean was charged after deputies observed his vehicle going off the road in the area of Old Ox Road and Mercurie Circle. Dean was later released from the Loudoun County Adult Detention Center on a personal recognizance bond.

1700 block of Wainwright Drive, bag and battery from vehicle

Police say there have been no updates yet in the search for a suspect who pulled a woman into a wooded area near Tall Oaks Village Center on Monday afternoon and attempted to remove her clothing.

“No suspect has been located,” Officer Don Gotthardt, of FCPD’s Media Relations Bureau, told Reston Now on Tuesday morning. “I have reached out to our detectives asking for any updates [and] we will post those on our news blog and Twitter.”

The suspect has been described as a Hispanic male in his late 20s or early 30s, with brown hair and a full beard. He was wearing a gray shirt with red lettering, a red ball cap and shorts. He fled the scene in a gray or silver Hyundai with a license plate that is believed to begin with a V, police say.

Finally, as we previously reported, three men were reportedly assaulted by a “group of men” on South Lakes Drive last Wednesday. The suspects in that crime are black men in their 20s, all between 5-foot-7 and 5-foot-10.