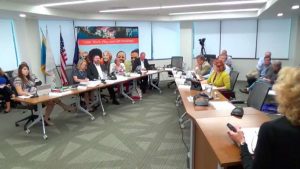 The search for savings by Reston Association staff has resulted in a $678 proposed assessment rate for 2018.

The figure was discussed during a budget workshop session with the RA Board of Directors on Monday (video/PowerPoint presentation). That number would be a decrease of $42 (5.83 percent) from the 2017 assessment level of $720, which was reduced to $692 using surplus cash.

One of the major factors that influenced the budget development, allowing for the decrease in the proposed rate, is the additional assessment revenue that will be provided by 429 new units at the Sunrise Square and VY developments.

That assessment rate will likely change, though, before the Board finalizes the 2018 operations budget, projected at $14.3 million. The Board has been asked to consider numerous staff and member suggestions which could affect the budget.

One big way it could change depends upon whether the Board decides to pay off the loan on the Lake House. If it does so — at a cost of $182,797 — there will be a reduction of $8.66 in the 2018 assessment rate as a result of no longer making payments.

“Essentially, we’ll be using up our cash to pay off the loan,” Sridhar. “In the corporate world, you give it back to the shareholders, which in this case is the members.”

The 2018 budget currently on the table has the Lake House being maintained on the status quo, through programming and rentals while making payments on the loan. That would result in a net loss of more than $190,000, according to the projection. Other options on the table include continuing status quo for six months and then moving to only rentals, or to use the facility for rentals only. With those latter options, along with paying off the loan, the Lake House is projected to represent a net profit in the 2018 budget.

CEO Cate Fulkerson said staff “highly recommends” the Board pay off the loan at the end of this year.

“I am looking forward to that conversation, because I think that there is a lot of area where the Board can make a positive impact on the community, both financially and through programming,” said Sherri Hebert, Board president.

In addition to bringing in in-house legal support, the cost of which Fulkerson said would be canceled out by the savings from reducing outside legal services, the Board is also being asked to consider other staffing additions.

Anna Varone, director of covenants administration, asked the Board to consider adding a post-DRB project approval inspector. This position is estimated to add $55,885 (salary and benefits) to the budget, with a $2.65 impact on the assessment.

Mike McNamara, deputy director of maintenance, said the Board should consider adding two seasonal workers to address litter control. This would cost about $40,000 (salary and supplies), with an impact of $1.93 on the assessment.

At a meeting last week, the Board was presented a potential $2.82 million Capital Projects budget.

A community meeting on the budget development process is scheduled for 7 p.m. Thursday, Sept. 14. The Board will then hold further budget work sessions, along with a joint meeting with Fairfax County Supervisor Cathy Hudgins, on Monday, Sept. 18.

The final drafts of the capital projects and operations budgets are to be presented Sept. 28, with public hearings in October and the approval in November.