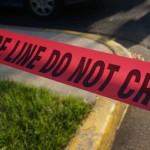 A fight escalated to the point of gunfire Saturday afternoon in South Reston.

According to the Fairfax County Police Department, the incident took place at about 5:45 p.m. in the 2200 block of Stone Wheel Drive. Police say groups of people were arguing in a parking lot near the Southgate Community Center. At some point, people in each group pulled out guns and shots were exchanged.

No one was hurt; however, police say “several vehicles” were damaged by bullets. Evidence was collected and the investigation in ongoing, FCPD says.