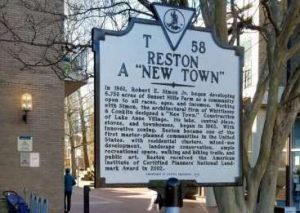 Money magazine today released its list of the best places to live in America and, once again, Reston made the cut.

Of the three Virginia communities on this year’s list, Reston ranked the highest. It is just above nearby Ashburn, which placed at No. 30; and Midlothian, located near Richmond in Chesterfield County, at No. 49.

Reston is also the highest-ranked community in the DC Metro, with the area’s only other nod coming for Rockville at No. 39.

According to the writeup from the Money magazine, which is published by Time Inc.:

Reston was once just an idea. In the early 1960s, architect and economist Robert E. Simon mapped out a vision for a community that upheld open space, recreational facilities, and aesthetic beauty.

Today, the thriving Washington, D.C., suburb offers a woodsy atmosphere that includes expanses of parks, lakes, golf courses, and bridle paths. Over 50 miles of pathways were designed to weave in and around its communities to increase pedestrian safety and to ensure that most residents’ homes were no more than a half-mile walk to village centers.

Reston Town Center, the community hub, provides an array of dining, entertainment, and shopping venues, along with headquarters for ComScore and Rolls-Royce North America; the town is also the site of a Google office and five of the largest venture capital firms in Virginia, as well as a Metro rail station for Washington commuters. Those help keep the town’s unemployment rate well below the national average. — Gabriela Fernandez

(Editor’s Note: While the writeup refers to Reston as a town, it is not an incorporated community, but rather a census-designated place.)

According to Money magazine, this year’s list includes communities with populations between 10,000 and 100,000. After they “eliminated any place that had more than double the national crime risk, less than 85 percent of its state’s median household income, or a lack of ethnic diversity,” the list’s creators were left with about 2,400 communities from which to choose.

To find the top 100, they “considered data on each place’s economic health, cost of living, public education, crime, ease of living, and amenities, all provided by research partner Witlytic.” Realtor.com helped compile the list by contributing data on housing market costs and growth.

Take a look at the full list, topped by the Indianapolis suburb of Fishers, and let us know what you think of the ranking.

More Stories
‘Why Is There No Shake Shack in Reston?’ and Other Burning Fast-Food QuestionsIssues Fair Planned as Part of Herndon-Reston Indivisible Meeting This Week